This cake deserves a better name. 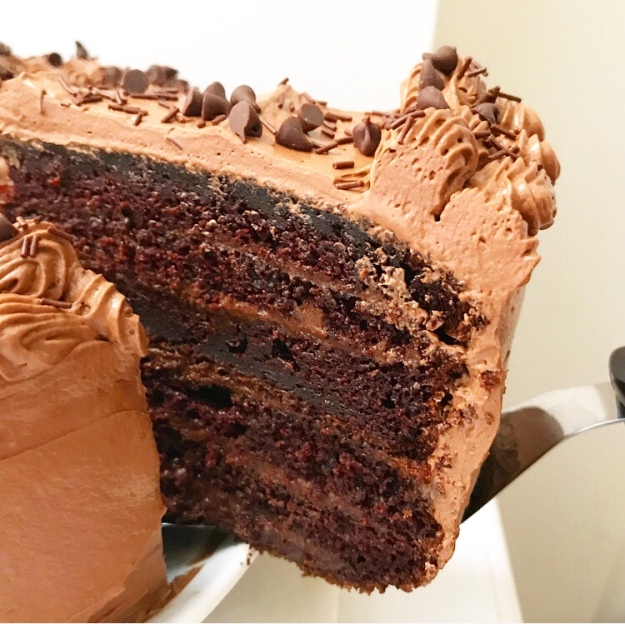 It’s thin layers of my favorite chocolate cake filled with chocolate pudding and frosted with the best buttercream ever to come out of my kitchen. It should have a more creative name than Triple Chocolate Cake. 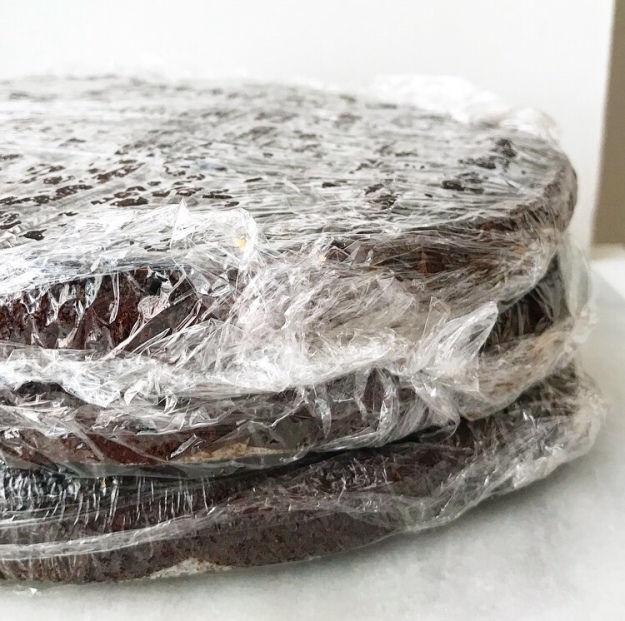 Other name options included, but were not limited to:

*Gertrude is a chihuahua whom I have never met. She cannot actually eat chocolate, nor has she ever baked a thing (as far as I know). Things got weird, okay?
**Six thin layers of cake (three layers, split in half), five layers of pudding.

When all was said and done and over-analyzed, I went with the least ridiculous, most accessible, accurate name. Triple Chocolate Cake it is—the most decadent, chocolaty cake ever to appear on this blog.

Out of the three sources of chocolate in this cake, I’ve already discussed two of them at length. You’ve heard me wax on and on about my stellar chocolate cake and I recently wrote all about my seriously phenomenal chocolate pudding. I could have frosted this cake with a thick layer of chocolate buttercream, but instead I turned the volume up to 11… 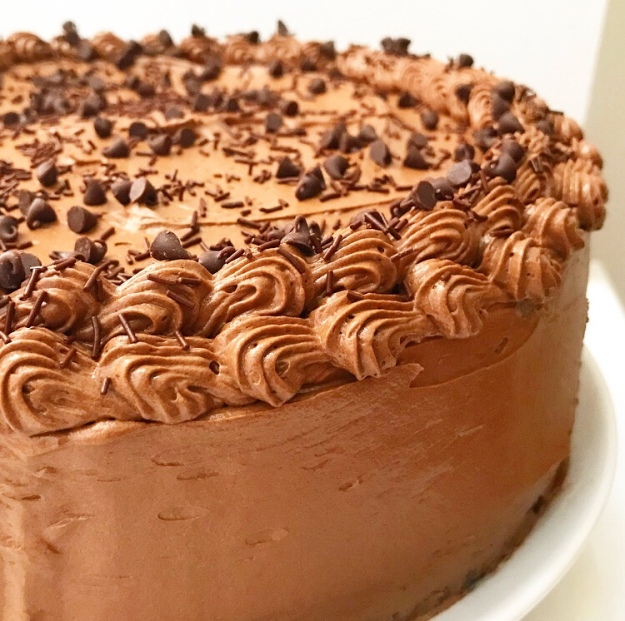 Every buttercream that has appeared previously on this site has been some variation on an American Buttercream: a frosting consisting of softened butter, confectioner’s sugar, and vanilla. I usually jazz mine up with heavy cream, and while they are all fluffy and luxurious, none are quite as divine as this one, which is airy from whipped egg whites and rich from butter and melted chocolate. 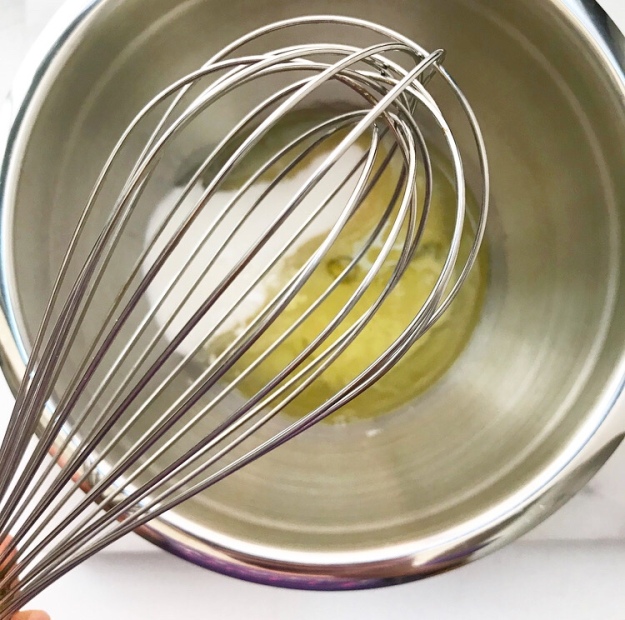 Let me give you a quick overview. It all starts with melting sugar into egg whites… 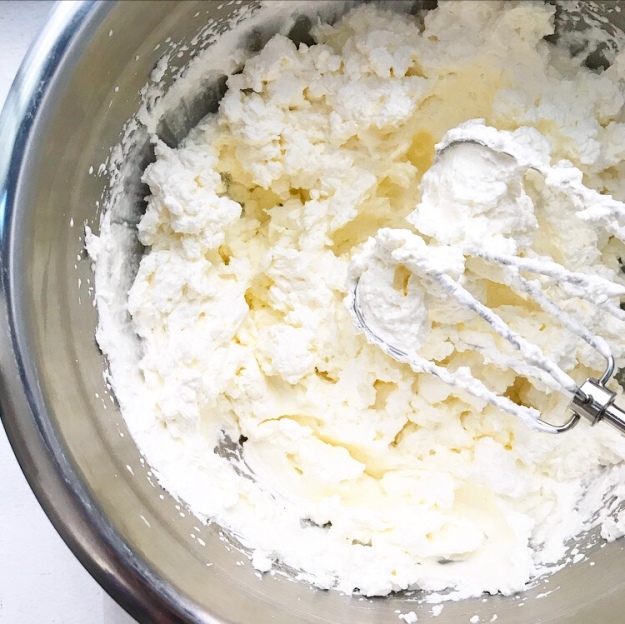 …and then beating it all into a glossy meringue. Next come two sticks of softened butter…

…and then ten ounces of melted bittersweet chocolate. Oh my word.

Unlike American buttercreams, this one requires a couple of bowls and a little patience, but it is worth every last ounce of effort. I swear, I would eat Chocolate Swiss Meringue Buttercream on a piece of cardboard if it were offered to me… 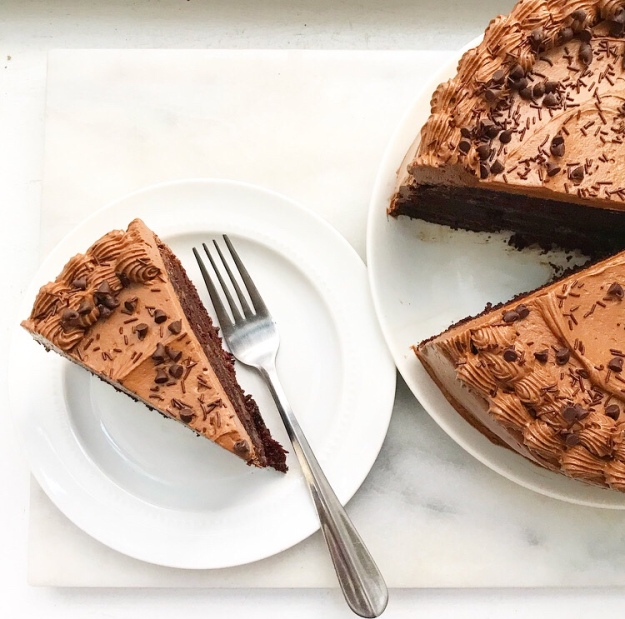 …but I would much prefer to eat it on chocolate cake. This one specifically.

Cake layers and Chocolate Pudding may be made up to 2 days in advance and stored in the refrigerator.

Preheat the oven to 350F. Grease 3 9-inch round cake pans. Line the bottoms with parchment and grease again. Set aside.

In a separate large mixing bowl, whisk together oil and eggs, followed by vanilla, buttermilk, and coffee. Whisk in dry ingredients in three installments, just until combined. Divide batter evenly among the pans. Tap full pans on the counter five times to release any air bubbles. Bake 25-27 minutes, or until a toothpick inserted in the middle comes out clean.

Let cakes cool in pans for 10 minutes before running a small, thin knife around the edges. Invert cakes onto cooling racks and allow to cool to room temperature. Wrap in plastic wrap and refrigerate for 2 hours or up to 2 days. Layers are easiest to work with when they are cold.

Assemble the cake. Use a serrated knife to slice cake layers equatorially so that you are left with 6 very thin layers. Place one layer, cut-side-up on a serving plate or cake stand. Use an offset spatula to spread ~1/3 cup of chocolate pudding over the top. Place another thin layer on top and spread with more pudding. Repeat this process until you have 6 thin layers of cake and 5 of pudding. Tent the cake with plastic wrap and refrigerate while you prepare the Chocolate Swiss Meringue Buttercream.

Remove cake from the refrigerator and uncover. Use an offset icing knife to frost the outside of the cake with buttercream. Pipe as desired. Decorate with mini chocolate chips and/or chocolate sprinkles, if desired. Chill cake for at least 30 minutes before serving.

Leftover cake will keep covered in the refrigerator for up to 5 days.

Egg whites will not whip properly if they are not treated well. Before beginning, please ensure that all equipment used in this recipe is very clean and dry. I like to wipe down the bowl(s), whisk, and mixer attachments with vinegar before starting the recipe. There is no way to salvage this recipe if the egg whites are contaminated with oil, yolk, or even water.

Chop chocolate. Place chopped chocolate in a microwave-safe bowl and microwave in 15-second increments, stirring in between, until smooth. Set aside.

Fill a small pot with 1-2 inches of water. Set a very clean, dry heatproof bowl over the top, ensuring that the water does not touch the bottom of the bowl. Remove bowl and bring water to a simmer.

Combine egg whites, sugar, salt, and cream of tartar in the heatproof bowl. Place bowl over simmering water and whisk frequently until sugar dissolves. Test for readiness by rubbing a drop of the mixture between your clean, dry fingertips to feel for granules. Remove bowl from heat and wipe off the bottom to remove any condensation.

Use a very clean, dry electric mixer with a whisk attachment to beat egg white mixture until room temperature and doubled in size, about 7-10 minutes. At this point, the mixture (a meringue) should hold stiff peaks and be glossy.

Add butter 1 tablespoon at a time, mixing to combine. Buttercream will probably curdle before re-forming; this is normal. Continue to whip until it thickens and becomes airy and frosting-like. If the buttercream is taking a long time to thicken, it may be too warm. Simply pop the bowl in the refrigerator for 15 minutes before whipping again.

Pour in chocolate and whip until combined. Fill and frost cake layers as desired.

Leftover frosting will keep in an airtight container in the refrigerator for up to 2 weeks. Let come to room temperature and whip until fluffy before using.

1. I use the ones leftover from making pudding.
2. Cream of tartar is required for this recipe. There is no substitute for this ingredient. 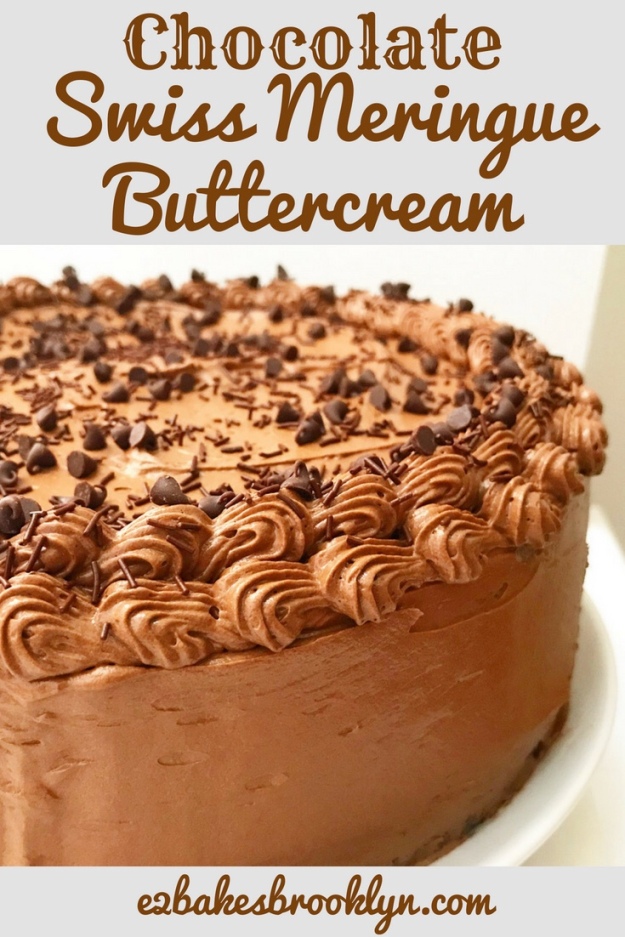