On New Year’s Eve, I made dinner for 300 people. Well, it wasn’t all me–I had spectacular help, including a professional chef who cooked with me for ten straight hours on his day off–but I was in charge. This wasn’t my first rodeo with large-scale cooking (I make pies and cakes for groups of 100 or more many times throughout the year), but three hundred is a lot for someone who doesn’t list catering on her résumé. When I was asked to do this event in November, I had decided on a Tex-Mex menu that included five types of enchiladas, Borracho beans, rice, and chips and salsa. At first it seemed feasible, but as the weeks went on, I started to panic. How was I going to roll a thousand enchiladas? Even with help and a professional kitchen, that’s a lot. How was I even going to get the thousand tortillas from the factory in Queens? Like many New Yorkers, I don’t have a car. Does the Brooklyn Costco actually carry sweet potatoes (for the vegetarians)? This remains a mystery. I left for Christmas in Austin feeling doomed to fail. But then, there was pozole.

The day after Christmas, my mom, younger sister, and I went for lunch at El Alma. My sister said their nopales salad was the best (and she was right), but we wanted something to go with it. Since it was midday, a full enchilada plate seemed…heavy. We were about to pester our waiter with a million questions when he mentioned their daily special, red pozole: a pork and hominy* stew in a delicious chile-based broth, served with all sorts of toppings so each person can customize their bowl. Ours arrived with little plates of sliced cabbage, avocado, radishes, chopped cilantro, crumbled queso fresco, fried tortillas, and lime wedges. I added a little bit of everything and dug in. Now, I knew it was going to be good, but I didn’t know that it would change the course of my week. Part way through lunch, my mom suggested that this would be good for the New Year’s Eve party.

*Hominy is maize that has been washed in an alkaline solution. It’s chewy, hearty, and fantastic.

At first I shrugged it off, but then I got to thinking: stew is generally simple to make, it’s easy to expand, and everybody loves toppings. By the end of the weekend, I had cancelled the tortilla order, looked at every posole recipe I could find, and rewritten the menu–three types of posole, a salad, and chips and salsa. After a few huge shopping trips (including one during which a friend and I bought 91 pounds of canned hominy while the employees of a Sunset Park supermarket looked on in horror), two days of cooking, and only one hour of absolute panic (just before service), it was time for dinner. 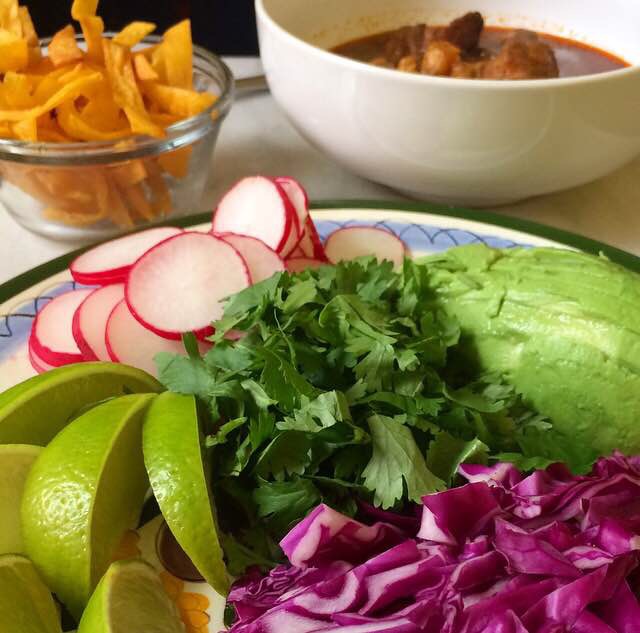 In all of my preparation, I didn’t anticipate one thing: New Yorkers–the ones I know, at least–have never heard of Pozole. At first, people didn’t quite know what to make of their dinners, but with a little instruction, soon everybody was raving and coming back for seconds. I made a chicken version and a vegan sweet potato-black bean, but pork was the most popular by a long shot. It was gone before everyone had gotten through the line the first time! Since the party, I’ve gotten at least ten requests for my recipe, and I am happy to oblige.

Pozole starts with mixing together a combination of chili powder(s), cumin, and salt. This will be the entire basis for flavor in this dish. You may use any chili powder you prefer here. I like to use a 1:1 combination of ancho chile powder and standard chili powder, just because the ancho adds a lot of authenticity to the finished dish. If you’d like to go a little spicier, I recommend adding chile de arbol powder or a pinch of cayenne. Just taste as you mix–make sure you like the baseline flavor. Toss half of your spice mix with some pork shoulder that you’ve cut into bite-sized pieces, then sear in batches. You don’t need to cook the pork all the way through (it’ll cook for a long time in the broth); you’re just adding flavor and texture. Once all the meat has been seared, sauté an onion and some garlic for a few minutes, until everything is fragrant. Then add in a 6-ounce can of tomato paste. Cook the tomato paste/onion/garlic mixture for several minutes, so that it starts to darken and caramelize. Add in the remainder of your spice mixture, some dried oregano, the pork, and a bay leaf, and then submerge everything in water. Cover the pot, bring everything to a boil, and reduce it to a simmer for 90 minutes to two hours, until the meat is very tender. Then add two cans of hominy that have been drained and rinsed, cover the pot again, and cook for an additional 30 minutes. Finally, take the stew off the heat, squeeze in some lime juice and adjust the salt, and serve with a plate of toppings. The tender pork and chewy hominy, in combination with the chile broth and crunchy, fragrant toppings, are to die for. 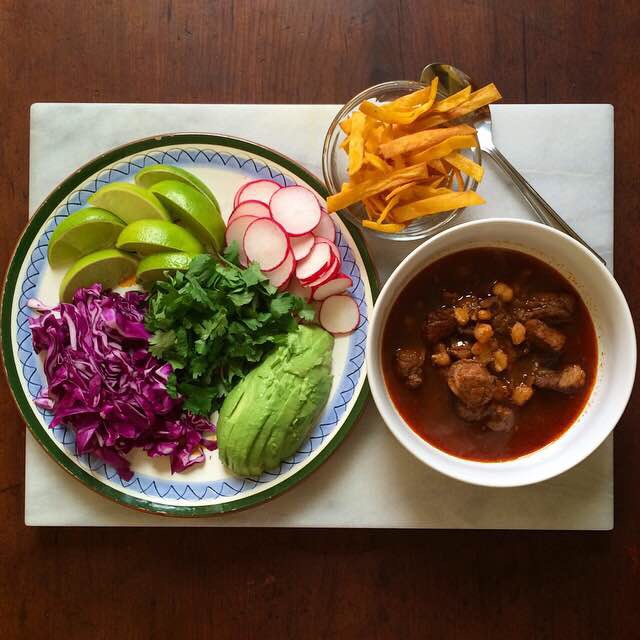 Red Pozole is a warm, comforting, and fairly healthy meal for these cold days. It’s great for a Sunday dinner, and with so many options for topping, even picky eaters will be excited about it. Speaking of toppings, you can eat it multiple times in a week without having the same bowl twice! It’s easy to scale up or down (this recipe was originally for 150!), so it’s great for entertaining or freezing for later. I’m sure Red Posole could even be made in a slow cooker, but I don’t have one, so I haven’t tried. If you do, let me know! I really can’t say enough good things about this recipe. Warm up with Red Pozole this winter!

In a small bowl, combine chili powder, cumin, and salt. Coat pork in 3 tablespoons of the mixture.

Heat a large stock pot over medium-high heat. Add 2 tablespoons of oil and swirl to coat. Sear pork in batches. Cook 2-3 minutes per side, adding oil as necessary–do not worry about cooking it through. Once all pork has been seared, pour off all but one tablespoon of leftover fat.

Turn heat to medium. Sauté diced onion until translucent, about five minutes. Add garlic and cook until fragrant, about one minute. Stir tomato paste into onion and garlic. Cook for 5-7 minutes, stirring frequently, until it starts to darken and caramelize. Stir in remaining spice mixture and oregano. Add seared pork back to the pot, followed by enough water so that everything is fully submerged. Add the bay leaf, and give everything a good stir. Cover the pot and bring it to a boil. When it reaches a boil, reduce the heat to a simmer and let cook for 90 minutes to two hours, until meat is tender. Do not uncover the pot unless to stir the stew. Add more water if it reduces at all.

When meat is tender, stir in hominy and let continue to simmer, covered, for thirty minutes. Remove from heat, and squeeze in the juice of a lime. Check for seasoning, and adjust salt as necessary. Ladle Pozole into shallow bowls, and serve with garnishes of choice.

Leftover Posole keeps well in the refrigerator for up to five days. Discard any solidified fat before reheating.

Notes:
1.  You may use any chili powder you choose. I prefer a combination of 2 tablespoons each ancho chile powder and regular chili powder.
2.  You may also use pork stew meat or pork butt. When I can’t find pork shoulder, I use a combination of pork tenderloin and pork butt. This recipe also works well with chicken.
3.  Hominy can be found at most large supermarkets. I find mine in the Goya aisle of Key Food. If you can’t find any, frozen corn might be a good (if inauthentic) substitute.