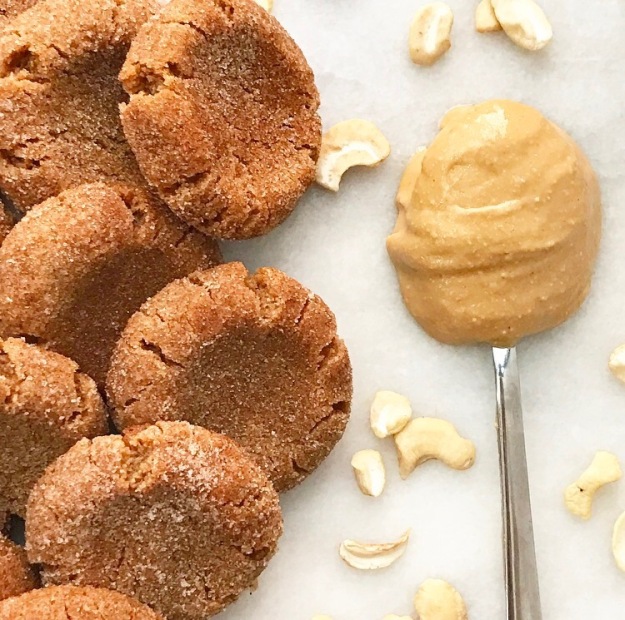 Sometimes I go weeks without any new recipe ideas. Other times, they just come to me out of the blue. One minute, I’m adding cashews to the filling of my Paleo Cheesecake, and the next, I’m totally consumed with the idea of Cashew Butter Snickerdoodles. Sometimes, it just hits me. 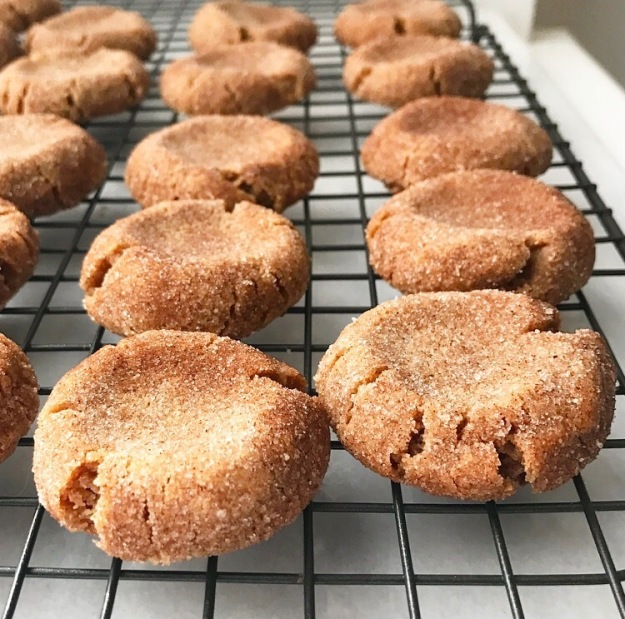 Y’all, I am all about these cookies. They’ve got everything you love about Snickerdoodles: a crisp edge and loads of cinnamon-sugar flavor. As an added bonus, they just happen to be vegan and gluten-free!

As I’ve mentioned before, there is a three-ingredient peanut butter cookie recipe that’s been around forever. The gist is that if you mix 1 cup of peanut butter, 1 cup of sugar, and an egg into a dough, you can make some seriously good peanut butter cookies. I’ve used that recipe as my starting place for a few recipes, this one included.

Here, creamy cashew butter provides structure and fat–no need for flour or butter. Cornstarch and baking powder are added to keep the cookies tender. You could certainly use a large egg in this dough, but I opted for a flax egg in an effort to keep these treats vegan. The cookies are sweetened with a combination of granulated and brown sugars and flavored with cinnamon and vanilla.

The dough comes together in just a few minutes. It will seem a little crumbly, but should hold together well when pinched. Roll it into balls and then coat them in cinnamon sugar before baking. Cashew Butter Snickerdoodles bake in less than ten minutes. They will be very puffy when they come out of the oven–you may leave them like that or tamp them down with a small spoon, as I have.

These cookies, y’all. They’re tender, loaded with Snickerdoodle flavor, and because they’re vegan and gluten-free, more people can enjoy them! I shared some with my vegan, gluten-free friend, VJ, and she was all about the buttery cashew flavor and huge hit of cinnamon. She said that she might like these more than traditional Snickerdoodles! I don’t know about that–Snickerdoodles are hard to beat–but I do know that you should make these. 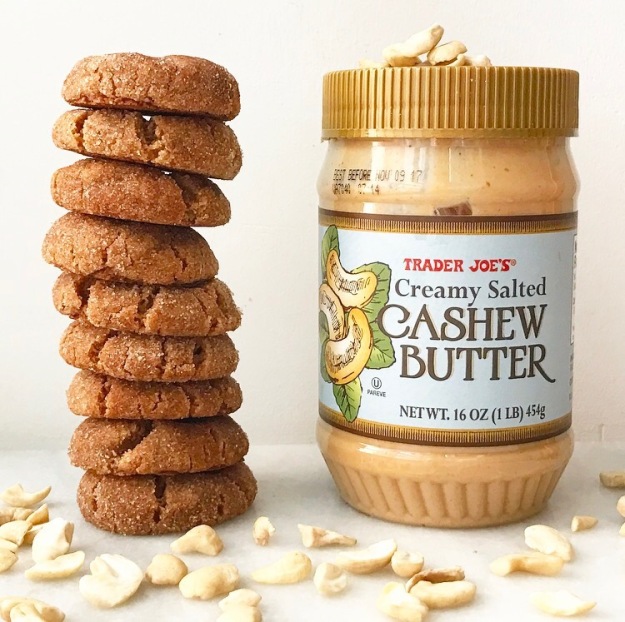 Preheat oven to 350F. Line a baking sheet with parchment. Set aside.

Make a flax egg. In a small bowl, combine ground flaxseed and water. Stir together and let sit for five minutes, until thickened.

In a large mixing bowl, use an electric mixer to beat cashew butter, light brown sugar, and granulated sugar until combined. Mix in flax egg and vanilla. Beat in cornstarch, cinnamon, baking powder, and salt. Dough will be crumbly, but should hold together when pinched,

Make the coating. In a small bowl, use a fork to stir together cinnamon and sugar until evenly mixed.

Scoop dough by the tablespoon and form into balls. Roll each ball in the coating and set on the prepared baking sheet. Dough balls should be 2 inches apart. Bake 8-9 minutes, until very puffy. Lightly press the top of each cookie with a small spoon. Allow cookies to cool on the baking sheet for ten minutes before removing to a rack to cool completely. Repeat baking process with any remaining dough.

Cookies will keep in an airtight container at room temperature for up to a week.

If you are not vegan, you may use a large egg (at room temperature) in place of the flax and water. Proceed with the recipe as written.