It’s finally fall! And you know what that means–pumpkin everything! I have tons of pumpkin recipes on the docket for the next couple of months, and I can’t wait to share them with you.

I’m starting the best baking season of the year with a twofer: Pumpkin Wafers and Pumpkin Icebox Cake! Because the only thing better than pumpkin cookies is a cake made out of them, right?! 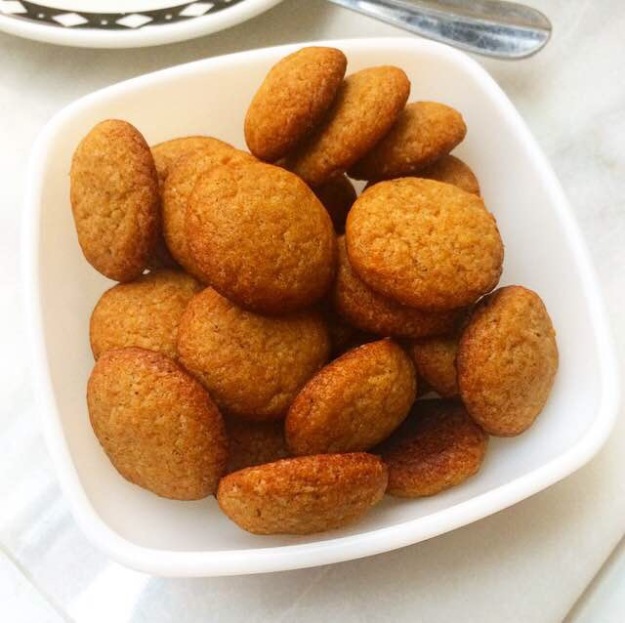 These recipes couldn’t be easier. The Pumpkin Wafers are a seasonal adaptation of my recipe for Vanilla Wafers (make those–way better than the box). The dough has tons of pumpkin pie spice and a good dose of pumpkin purée in addition to the usual suspects. If you’re looking for a great cookie to have with tea or coffee this season, this is the one!

These wafers are completely eggless. If there were eggs and pumpkin in this recipe, there would be too much moisture; the resulting wafers would be soft and cakey. By replacing the volume of eggs with pumpkin purée, the dough bakes into crispy, crunchy little wafers, ideal for dunking in coffee or layering in an icebox cake. And speaking of icebox cake…

This cake, y’all. It’s so easy and so good, it’s ridiculous. Arrange pumpkin wafers in a layer on the bottom of a springform pan (or on a cake plate), and top them with a layer of cream cheese-infused whipped cream. Continue alternating layers until there are four of each.

Then chill the cake for 24 hours. Yes, a whole day. This is where the real magic happens–the moisture from the cream softens the wafers until they’re soft and cake-like. Where icebox cakes made with storebought wafers or graham crackers are ready after an overnight chill, homemade wafers are sturdier and require more time. So this cake does require some advanced planning, but between mixing the dough, baking and cooling the wafers, and assembling the cake, the active work time is only about 90 minutes. 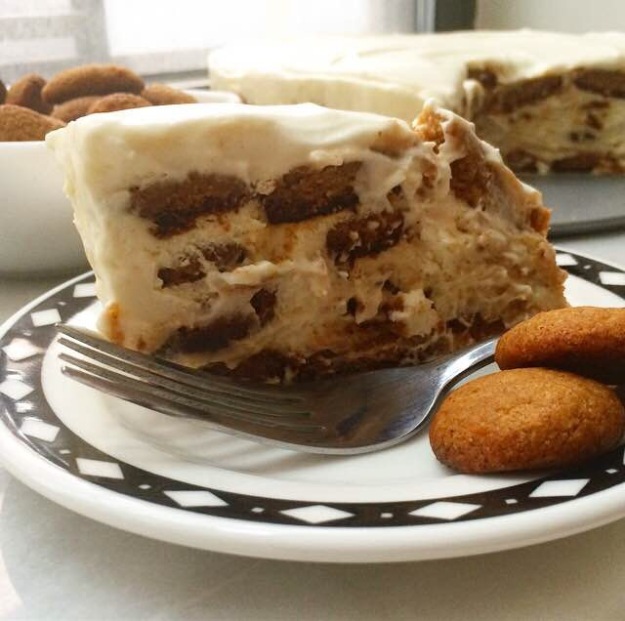 I cannot over-stress the importance of chilling this cake. See the broken off piece on the end of this slice? I cut this cake after only 12 hours because I was chasing daylight. MISTAKE! Don’t be like me. When I went back for more cake later that night, the wafers had softened completely and the cake was much easier to slice. Even if you do slice it too soon though, this cake will still be absolutely delicious. 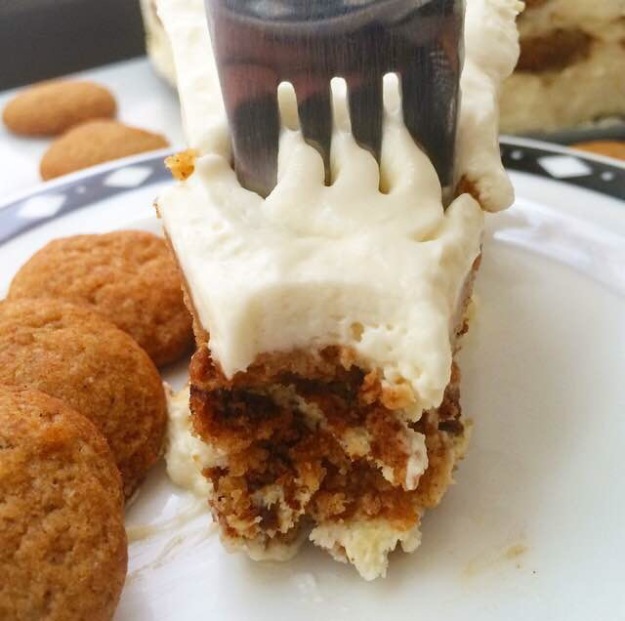 Let me know if you make one (or both!) of these recipes on Instagram @e2bakesbrooklyn!

In a large mixing bowl, use an electric mixer to beat butter until light and fluffy. Beat in light brown and granulated sugar, followed by pumpkin and vanilla. Add dry ingredients in two installments, mixing completely.

Scoop dough by the teaspoon and roll into balls. Place dough balls about 1 1/2-inches apart on prepared baking sheets. Bake 11-13 minutes, until golden at the edges and a bit soft. Let cool on the baking sheets for five minutes before removing to a rack to cool completely. Repeat baking process with any remaining dough. Wafers should harden as they cool. If they don’t, pop them back in the oven for an additional minute.

Wafers will keep in an airtight container for at least a week.

Place cream cheese, confectioner’s sugar, and vanilla in a large mixing bowl. Beat with an electric mixer until fluffy, about 2-3 minutes. Set aside.

In a separate mixing bowl, beat heavy cream until soft peaks form. Add cream cheese mixture 1/3 at a time, mixing on low until incorporated. Once all cream cheese has been added, beat mixture on medium-high until stiff peaks form. Set aside.

Run a small, thin knife around the edge of the cake and release the cake from the pan. Serve cold.

Cake will keep in the refrigerator for up to two days.

If you do not have a springform pan, cake may be assembled on a cake plate or cake stand. Arrange cookies in a 9-inch circle, and layer with the whipped cream mixture, as written.