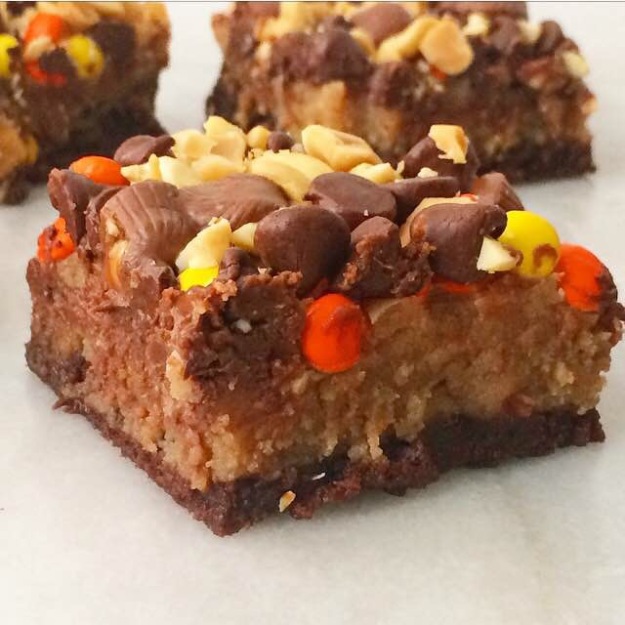 Yesterday was full of surprises. At 6pm I was headed to the grocery store to pick up cilantro for the chicken fajitas I was making at work, when my boss called. Three hours later, I was serving dinner to Nobel Peace Prize Nominee Victor Ochen. Just…what?

Now, if I had known that a Nobel Peace Prize Nominee were coming to dinner, I probably would have done a few things differently. I would have worn makeup and a nicer outfit, for one. And I probably wouldn’t have put chicken fajitas and brownies on the menu. But when life throws you a huge curveball, you just have to go with it. 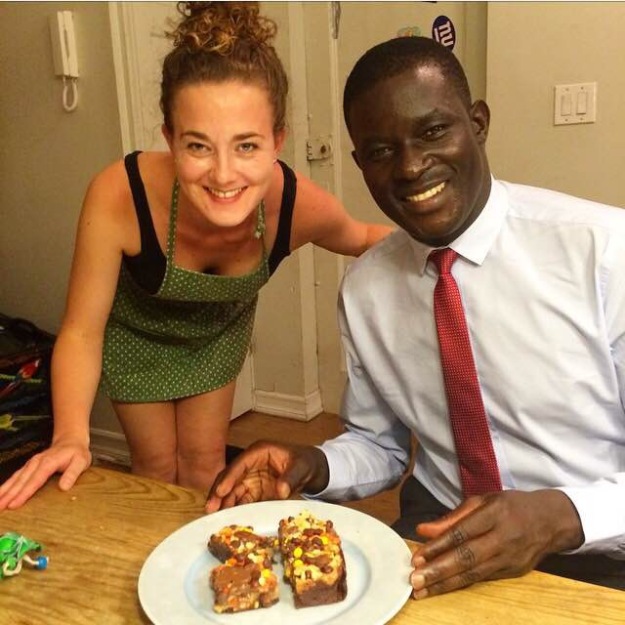 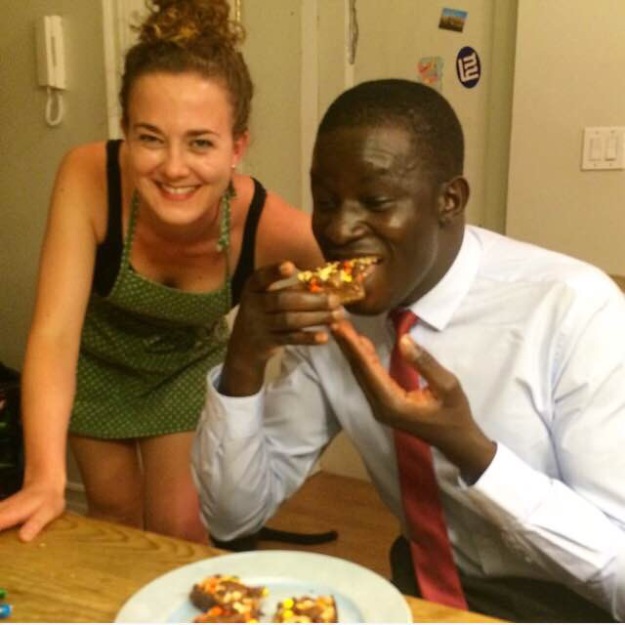 I still haven’t had time to absorb it all, but I know one thing to be true: everyone loves chocolate and peanut butter, even Nobel Peace Prize Nominees. When I cleared the dinner plates and brought out dessert, I didn’t know what to expect. Do Ugandan humanitarians like peanut butter?* Is it weird to serve candy-topped brownies to someone who spoke at the United Nations just moments before showing up at my boss’s apartment in Brooklyn Heights?** What does a person even do when they find out they’re throwing an impromptu dinner party for one of the ten most influential people in Africa?***

1. Yes.
2. Probably.
3. They make extra guacamole and thank their lucky stars that they brought dessert to work.

Yeah, yesterday was weird. But it was also amazing. 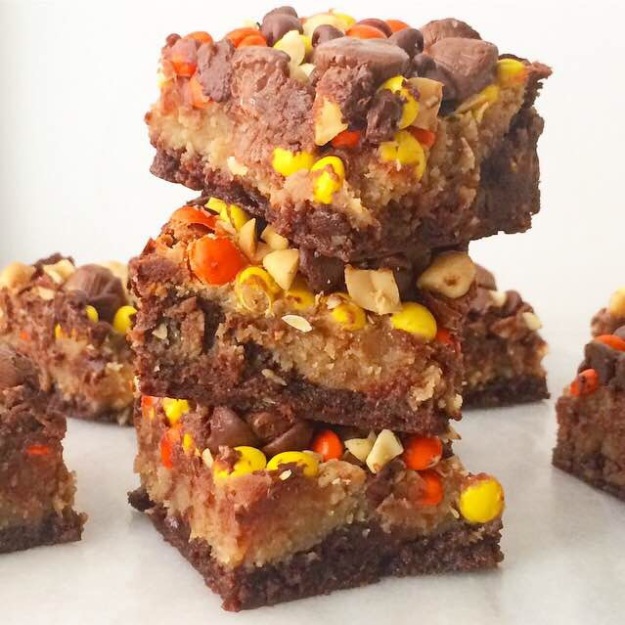 But enough about my day. Let’s talk about these Ultimate Chocolate-Peanut Butter Brownies. They’re goooood. And how couldn’t they be? The base is my favorite cocoa brownie recipe. It’s layered with a mixture of peanut butter and sweetened condensed milk. All of that is topped with Reese’s Pieces, chocolate chips, chopped peanuts, and miniature peanut butter cups. They’re a chocolate and peanut butter lover’s dream dessert! 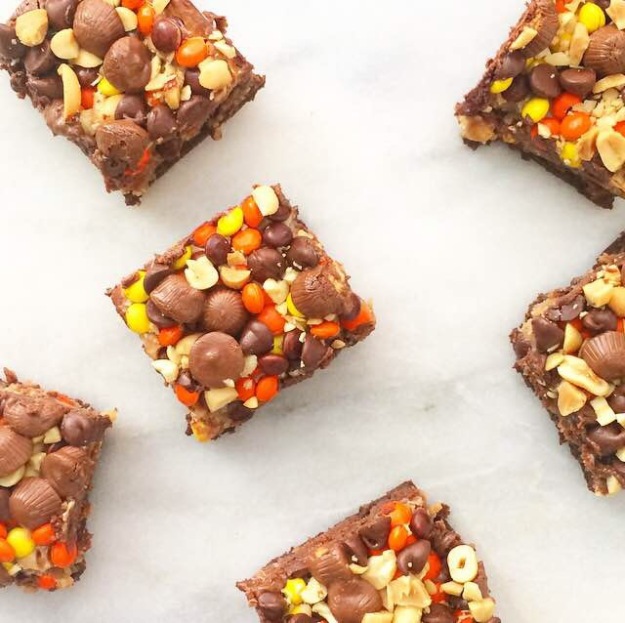 I can usually restrain myself around baked goods, but I ate two of these for breakfast yesterday. They’re that delicious. Knowing I’d eat the whole batch if they remained in my apartment, I boxed them up so my boss could take them to her office. And thank goodness I did–if they hadn’t been on the counter, I don’t know what I would have served for dessert last night. 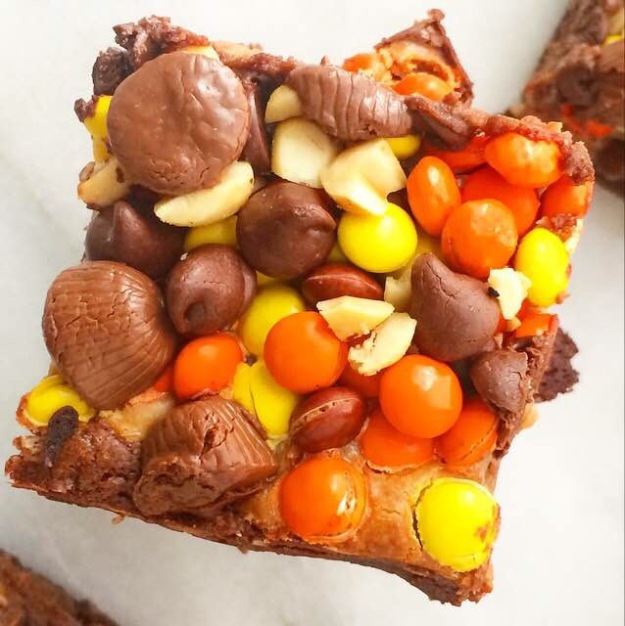 Preheat oven to 325F. Grease an 8- or 9-inch square baking dish and line with parchment. Grease the parchment. Set aside.

Melt butter in a saucepan or the microwave. Stir butter, sugars, and cocoa together in a large mixing bowl. Let mixture cool for a couple of minutes. Add the eggs one-by-one, mixing until they are completely incorporated. Stir in vanilla extract. Fold in flour and salt just until combined. Spread batter in prepared pan. Set aside.

In a small mixing bowl, whisk together sweetened condensed milk and peanut butter. Mixture will be thick. Drop spoonfuls of the mixture over the top of the brownie batter. Spread it out with a silicone spatula. Sprinkle the top with Reese’s Pieces Baking Pieces, chocolate chips, chopped peanuts, and miniature peanut butter cups. Lightly press toppings into the condensed milk layer.

Bake for 30-32 minutes, until the center just barely jiggles when the pan is jostled. Let the brownies cool completely in the pan on a rack. Use parchment to lift cooled brownies out of the pan. Slice and serve.

Brownies will keep in an airtight container at room temperature for up to five days, or in the refrigerator for up to a week. 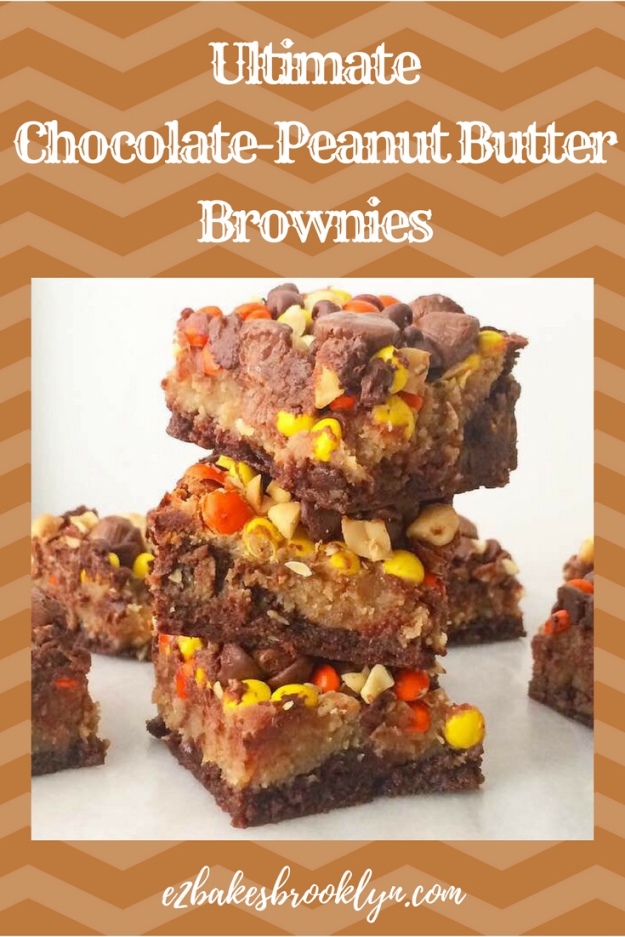