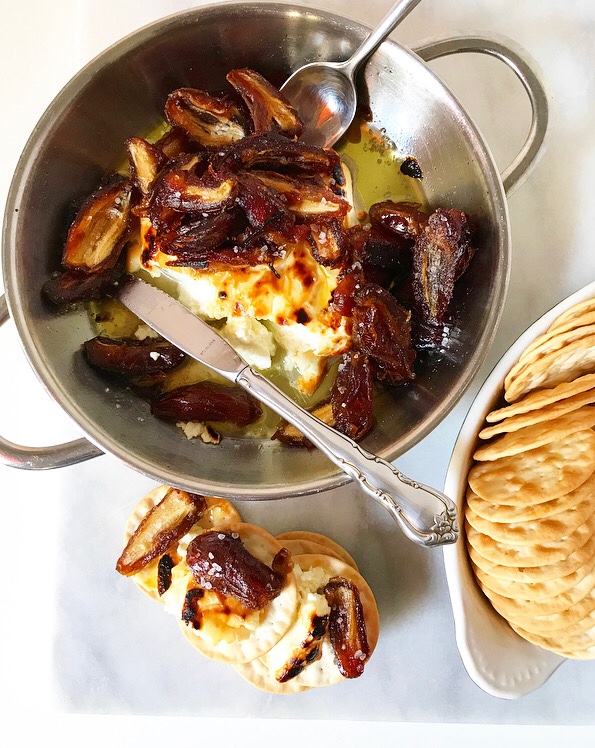 I’ve been making Thanksgiving food since mid-October, and while that’s my idea of a good time, it’s a bit of a relief that I’m not going to be anywhere near an oven on Thursday. My family traditionally travels and makes reservations for this particular holiday, so all I have to do is pack that skirt I marked as my “Thanksgiving outfit” back in September, get on a bus to D.C., and leave the cooking to a bunch of chefs. 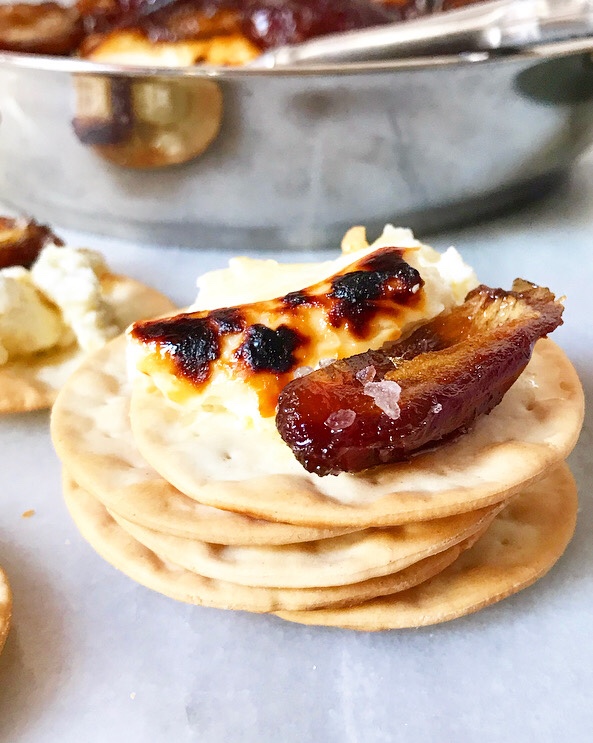 We’ve been doing this routine in different cities since 1997, so it’s second nature now. In fact, the only issue I have with my family’s Thanksgiving tradition is that I’ll have to wait til Christmas to make them this Baked Feta with Sautéed Dates. 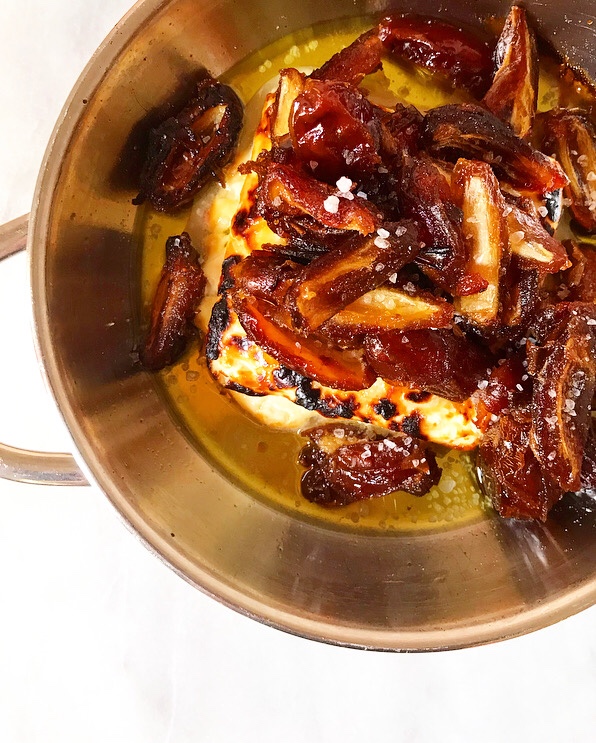 Poor them—they don’t know what they’re missing. I do, though, and so I am here to tell you that you absolutely, unequivocally should make this three days from now. 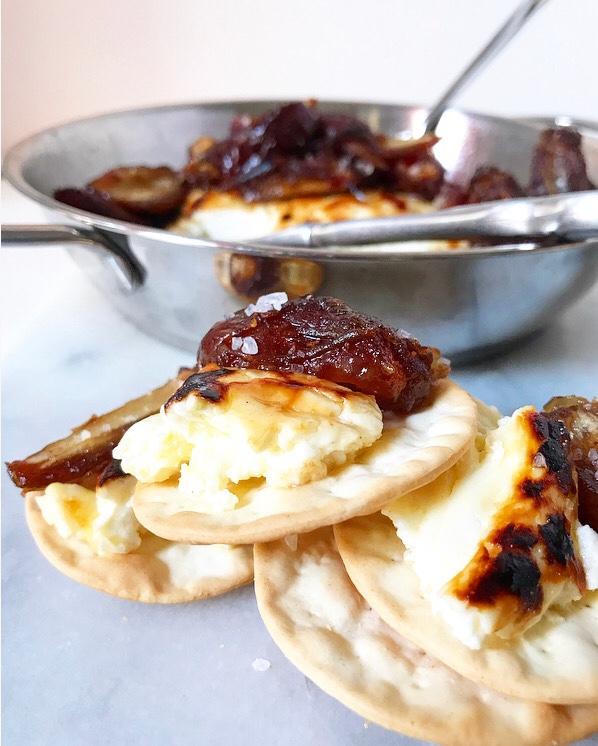 I know. I know! The menu’s set. You’ve made the list. But just go ahead and add a brick of feta and some dates to the tail end. I promise it’s worth the change in plans. 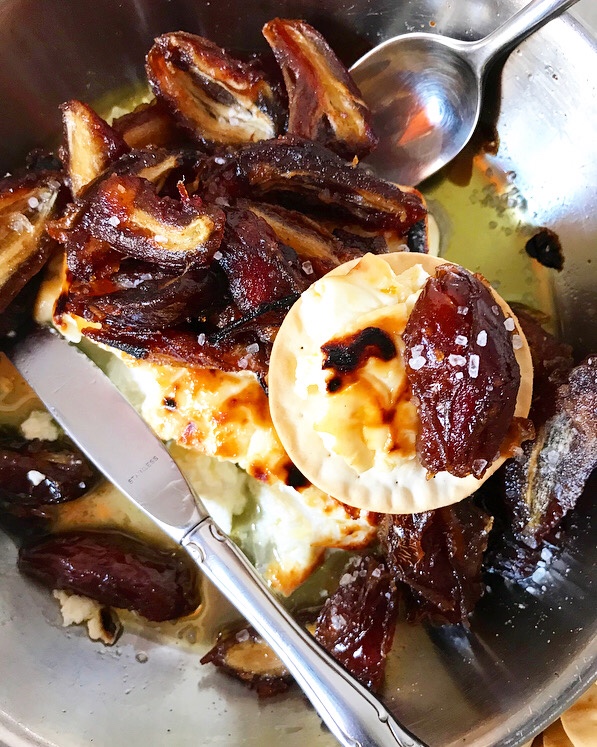 You’ll only need five ingredients (plus something carby for serving) and fifteen minutes to put this appetizer together, and I would be utterly shocked if it lasts more than another fifteen minutes. I was alone when I made the feta and dates pictured here, and I had trouble keeping myself from eating half the brick in one go. 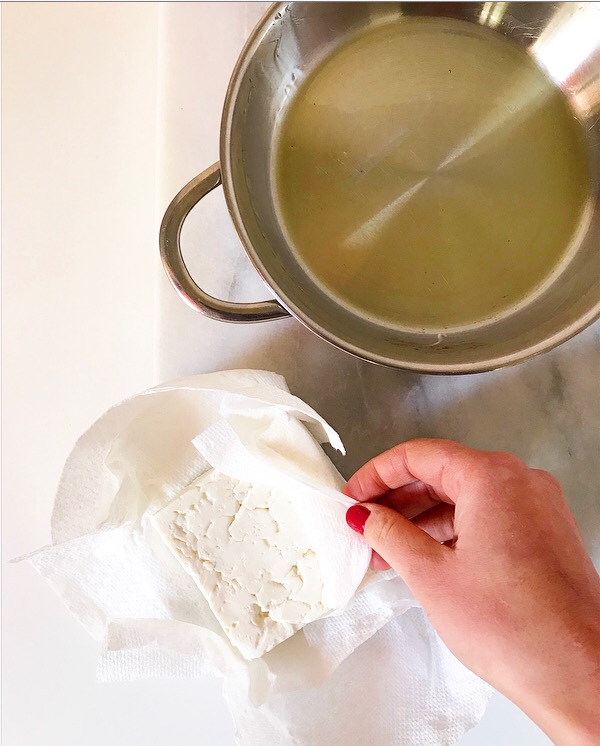 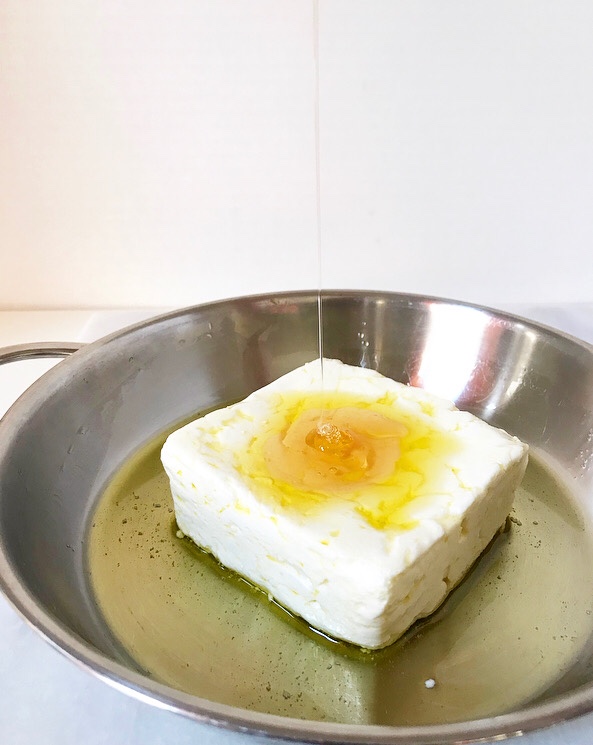 The feta is baked for ten minutes and broiled for a couple more. It turns soft and salty with crispy edges and corners that slump in the most pleasing way. It’s brushed with olive oil all over and honey on top before going into the oven, so it gets brown and blistered and…seriously, good luck not hoarding this all to yourself. 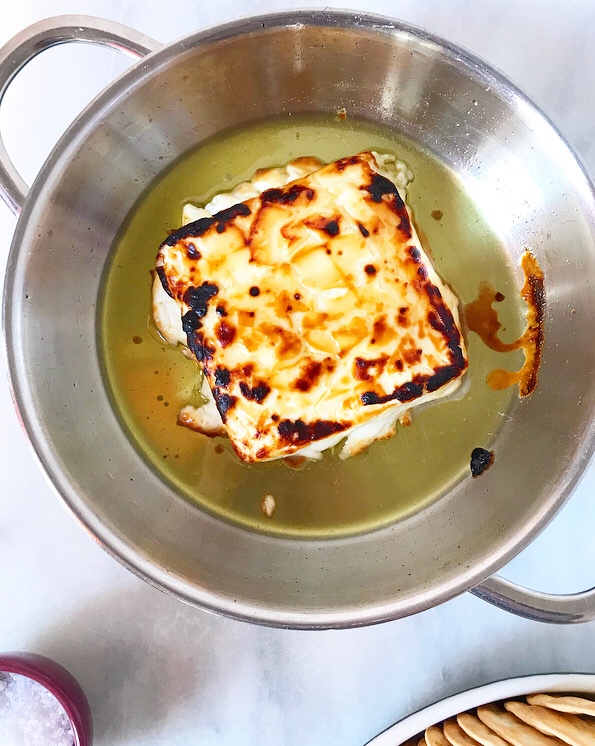 It won’t melt—feta doesn’t do that—but it will soften to the point where you can practically slice it with the edge of a cracker. Frankly, you could serve the feta by its lonesome and it’d disappear in minutes, but then you’d be denying yourself the magic of Sautéed Dates, and that’d be a real shame. 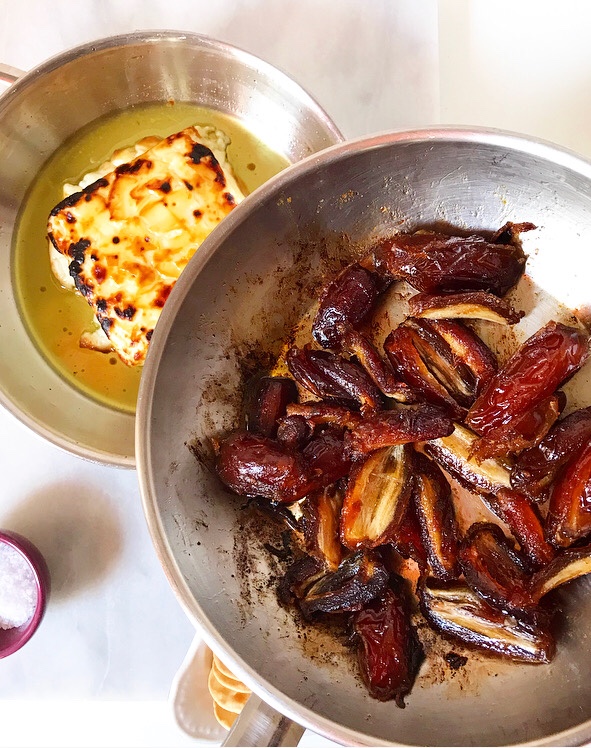 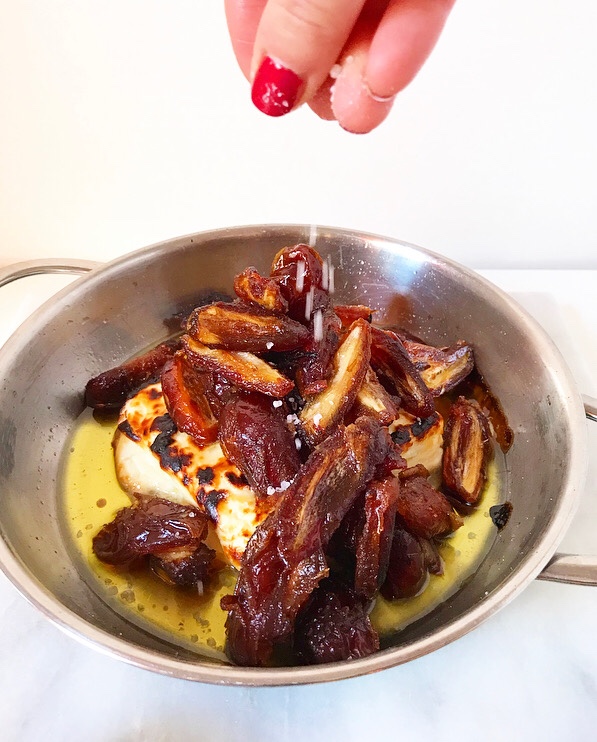 I mean, if there’s anything in the world that can stand up to the wonder that is Baked Feta, it’s these dates. They’re sautéed in olive oil for a minute or two while the cheese is in the oven, just until the edges begin to caramelize. The results are mostly sweet and a little savory—they’re great with yogurt, labneh and hummus. Here, they’re spooned over the warm feta and sprinkled with finishing salt before being scooped up with crackers or baguette or whatever and shoveled into your mouth as quickly as possible because—oh my goodness—this stuff is delicious. 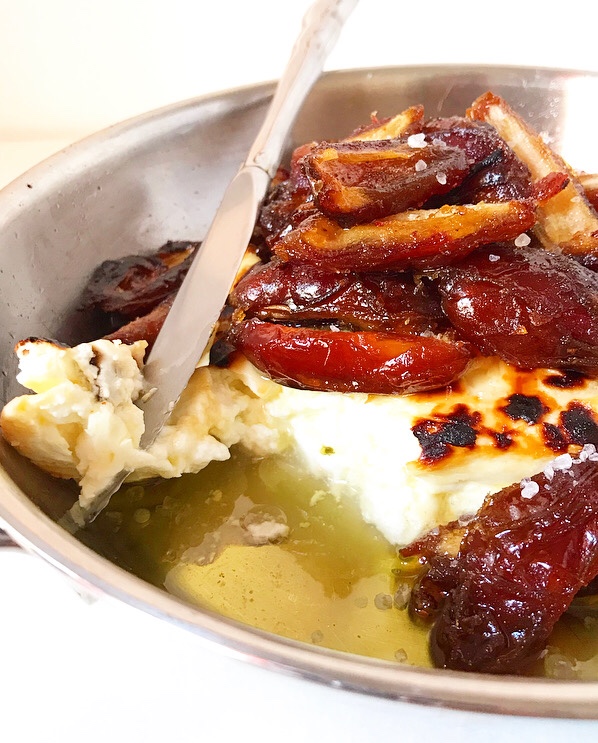 Salty, sweet, cheesy, savory, fruity, eyes-rolling-back-in-your-head good. You’re not going to want to share, but you should because…manners, I guess? But go ahead and plan to make this for every party between now and January 2nd, because if you can’t eat a brick of cheese during the holidays, when can you?! 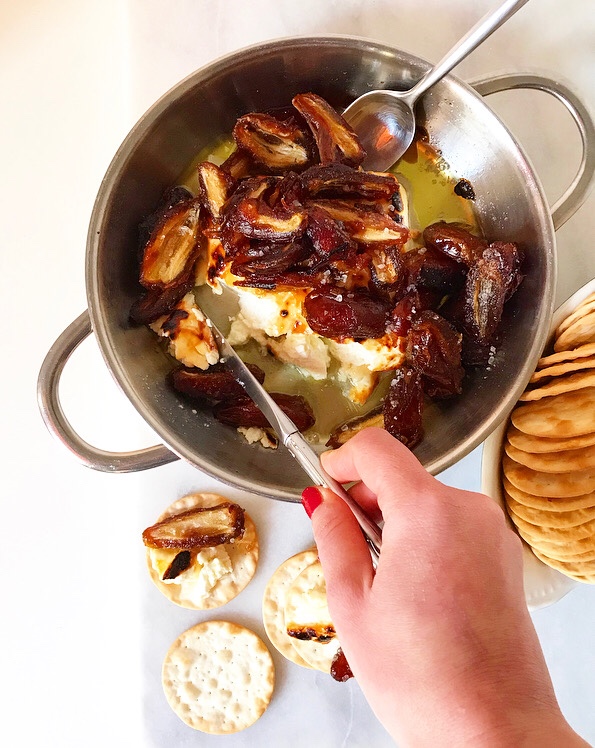 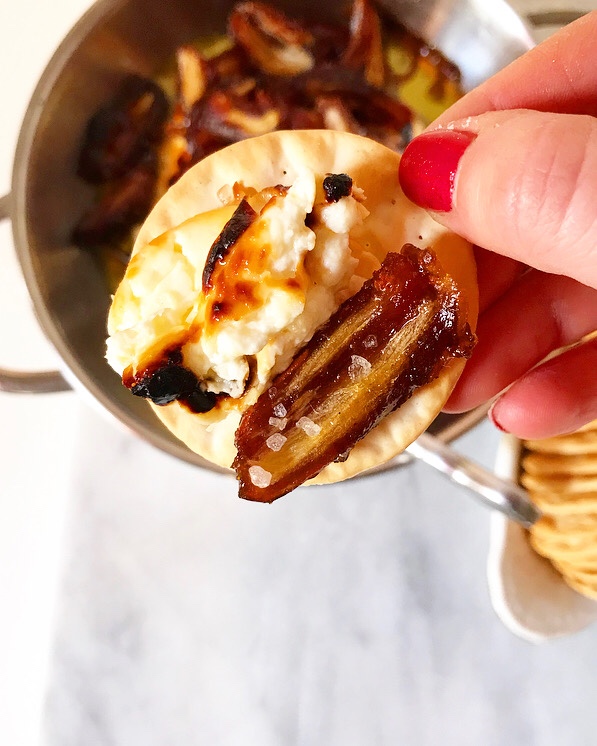 Preheat broiler. Broil feta for 2-4 minutes, until the top is blistered.

Meanwhile, sauté dates. Heat 1 tablespoon (3 teaspoons) olive oil in a small sauté pan over medium heat. Add halved dates and cook, flipping once or twice, until they have all been coated in a thin layer of oil and some are beginning to caramelize (about 2 minutes). Do not burn.

Spoon sautéed dates over baked feta. Sprinkle with coarse or flaky salt. Serve warm with crackers or bread of choice.

Baked feta will firm up as it cools. To rewarm, place in a 350-400F oven for 5 minutes or until soft again. 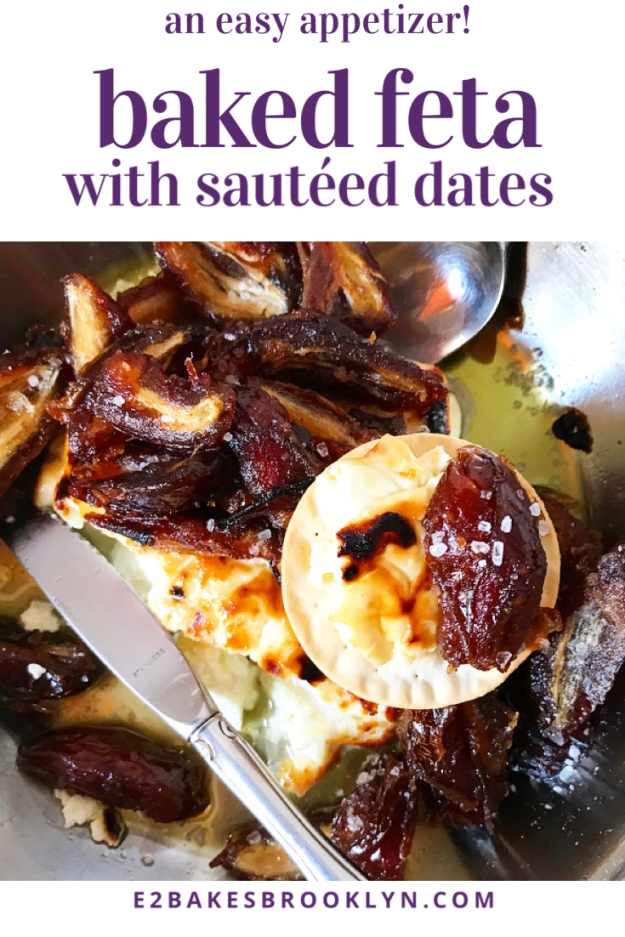