It took me seven tries to get these pancakes right.

About a month before we left for Maine, I declared to my travel buddies, VJ and Adam, that I was going to make a a pancake recipe that we could all enjoy. They sort of smiled and nodded because I had clearly lost my mind–VJ is a gluten-free vegan and Adam is a bit of a picky eater, so this basically seemed impossible. 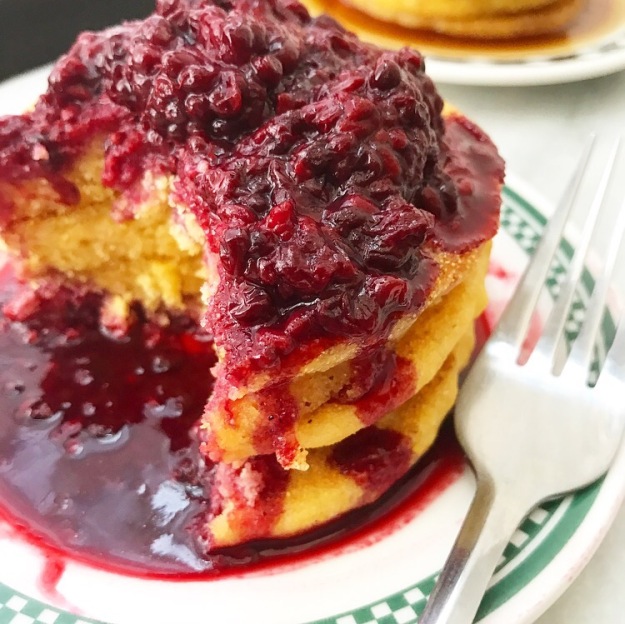 Never one to let logic stop me, I set to work. I looked at my pancake recipes and a couple more from around the internet, and then I had six consecutive fails. Every problem pancakes could have, these had: too dry, too bland, too thin, too many ingredients, too stuck to the pan–you name it. I had one batch that was somewhere in the realm of “okay” and as vacation drew near I figured it could work in a pinch, but I was less than enthused about it. I’d crack the code one day, but it wasn’t going to be in time for this trip. 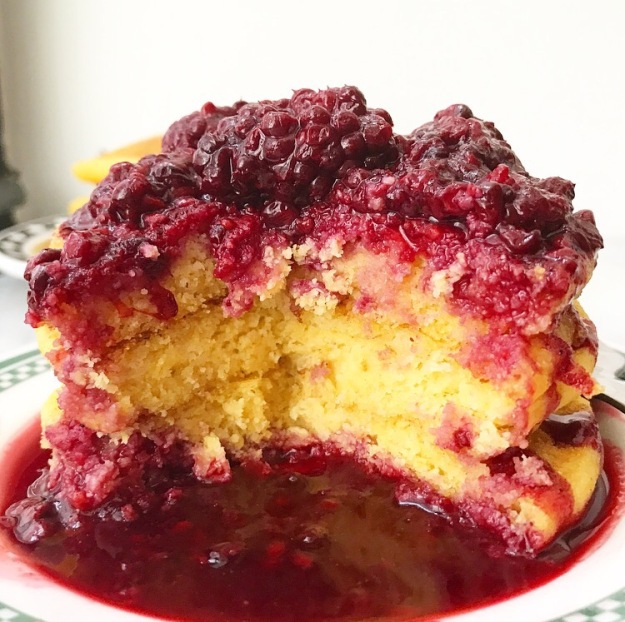 But then, there was cornbread. On the second night of vacation, we decided to grill out. Grilling is not my forte, so Adam took the lead there and I worked on side dishes. I threw out a few ideas to VJ; sautéed spinach was a definite winner, but she sort of lost her mind when I mentioned veganizing my already-gluten-free Southern-Style Cornbread. I had never attempted a vegan version of that recipe, but I figured it would be easy enough. I could swap almond milk soured with vinegar for buttermilk, use a few tablespoons of vegan margarine in place of butter, and I could crack open a can of chickpeas and use the aquafaba in place of the egg. It’s that last change that made that cornbread so good, and when VJ asked for my overhyped Cornmeal Pancakes last Wednesday morning, it’s that change that made a solidly “okay” recipe into one I’ll make again and again. 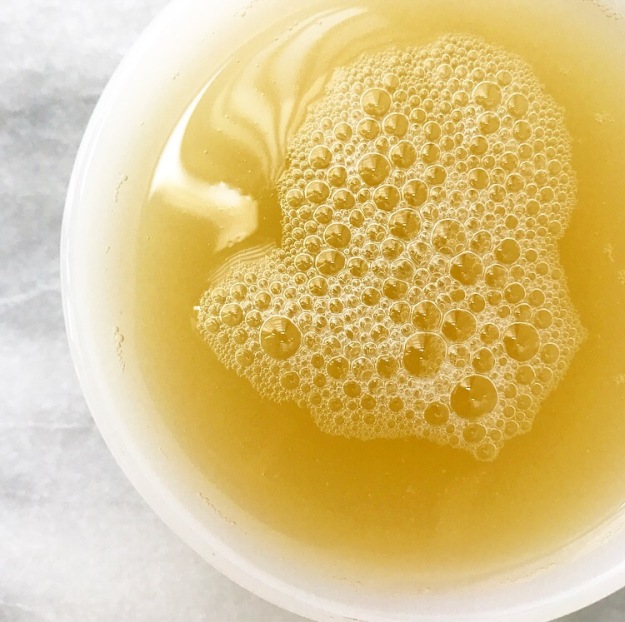 Have you heard of aquafaba? It’s having a bit of a moment right now–it made The New York Times﻿. If you’re in the dark about this miracle of modern baking, I’m sure you’re not alone. Literally translated, aquafaba means “bean water.” And that’s exactly what it is–the liquid from cooking (and canning) chickpeas. If you have a can of chickpeas (or any bean, actually) in your pantry, you have aquafaba in your house right now. Who knew?! 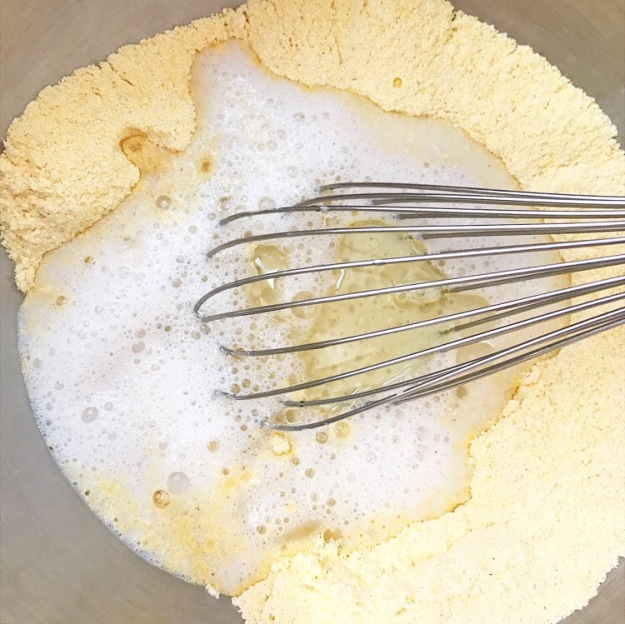 Before you go clicking away from this blog forever, hear me out. I know using the cooking liquid from chickpeas in baking sounds absolutely bizarre, but it actually makes a lot of sense, scientifically speaking. Like eggs, aquafaba is super high in protein and very viscous; when whipped, it can even hold stiff peaks! You don’t need to break out your mixer for this recipe though–just three tablespoons of liquid aquafaba help these Cornmeal Pancakes to stay fluffy and keep them from being too crumbly. And since aquafaba doesn’t have a distinctive flavor like other vegan egg replacers (I’m looking at you, flaxseed), it doesn’t distract from the slightly sweet corn flavor 🙌🏻🙌🏻🙌🏻

These Cornmeal Pancakes, y’all. They’re light and fluffy with crispy edges and a rich corn flavor. Oh, and they’re beautiful too.

…but I am all about this Blackberry Compote.

It only has four ingredients and takes less than ten minutes to prepare, and it’s basically like topping your pancakes with pie filling (but with much less sugar).

However you choose to serve these Cornmeal Pancakes, I hope they make your friends and family as happy as they made mine.

Heat about 1 tablespoon of oil in a non-stick skillet over medium heat. Add batter to the pan in 1/4 cup increments, leaving space between pancakes. Let cook until the edges no longer look raw, about 2-3 minutes. Flip pancakes and cook an additional 1-2 minutes. Remove to a plate. Repeat process with all remaining batter, adding oil to the pan as necessary.

In a small saucepan, combine blackberries, sugar, and cinnamon. Heat over medium-low heat, stirring frequently, until a sauce forms (about 5 minutes). Use a potato masher to mash blackberries until the desired texture is reached. Bring to a boil for 1 minute before removing from heat. Stir in lime juice. Let cool completely.

Compote will keep in an airtight container in the refrigerator for up to a week. 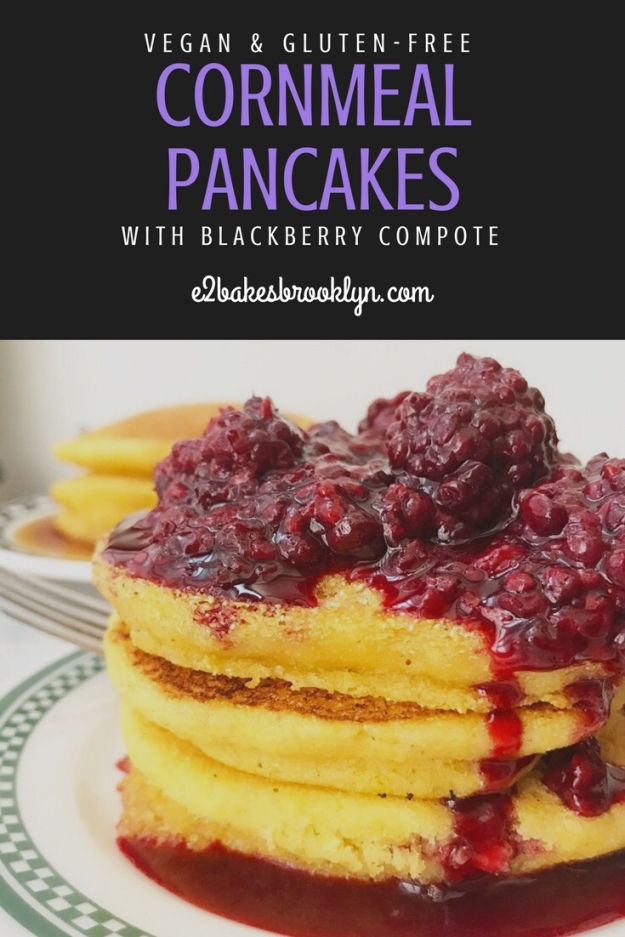