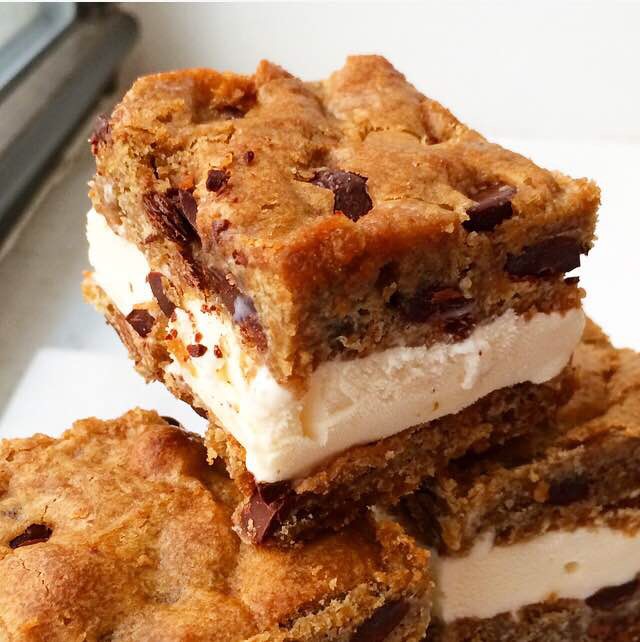 I spent all day trying to come up with a fun way to introduce today’s recipe, but it doesn’t need any fanfare. I mean, how could I possibly go on and on about what I’ve been doing this week when we have Brown Butter Blondie Ice Cream Sandwiches to discuss?!

Y’all. These are so good. I mean, how couldn’t they be? Ice cream sandwiched between two chocolate chip brown butter blondies? Sign me up!

This recipe is made with the same base I used for the Chocolate Chip-Pecan Brown Butter Blondies I made earlier this summer. I left out the pecans here, but that’s the only adjustment I made. I might also suggest using mini chocolate chips instead of the standard size, only because big chunks of frozen chocolate are a little hard to bite through. Not that I had any problem putting away two of these yesterday afternoon.

Anyway…for the ice cream sandwiches, you’ll need to make two batches of those chocolaty, brown-buttery blondies. Once they’re baked, stash them in the freezer for a half hour or so, until they’re a little cooler than room temperature.

Once your blondies are cool, scoop ice cream onto one batch and then use a spatula to smooth it into an even layer. Top the ice cream layer with the other batch of blondies, pressing down slightly to make sure everything is adhered together. Freeze the assembled ice cream sandwiches for at least two hours before slicing and serving.

These Brown Butter Blondie Ice Cream Sandwiches are my new favorite summer treat! The blondies are a little crunchy from being frozen, but still retain their signature chew. And the ice cream…I mean, hello. Ice cream and caramelly, chocolate chip-studded blondies are a match made in heaven. Sure, they’re a little messy to eat, but what good ice cream sandwich isn’t?!

Brown the butter. Place butter in a light-colored saucepan over medium heat. Let butter melt. Butter will bubble and crackle as the water content evaporates. Swirl the pan frequently for 5-7 minutes, keeping an eye on the color. When the solids are turning brown and the butter is nutty and fragrant, remove the pot from the heat and immediately pour the brown butter into a large mixing bowl.

Add brown sugar to the brown butter and stir to combine (it will be thick and look like wet sand). Whisk in egg and vanilla. Use a silicone spatula to stir in flour and salt, scraping down the bowl as needed. Fold in chocolate chips.

Divide batter evenly among prepared pans and bake for 20-22 minutes, until a toothpick inserted in the center comes out mostly clean. Let blondies cool in the pan on a rack for 10 minutes before placing them in the freezer for 30 minutes, until cool. Thaw ice cream just so that its scoopable.

Remove one pan from the freezer. Leaving the blondies in the parchment-lined pan, drop ice cream in scoops over the top, and then use a spatula to smooth it into one even layer. Remove the other pan from the freezer. Use the parchment to lift the un-topped blondies from the pan. Remove parchment. Place Blondies over the ice cream layer. Press down slightly to make sure everything is adhered. Cover the pan in foil and freeze at least two hours.

When everything is frozen, remove pan from freezer. Remove foil, and use parchment to lift ice cream-filled blondies onto a cutting board. Use a sharp chef’s knife to remove any ice cream that may have squished out the sides. Slice into 16-25 sandwiches. Place ice cream sandwiches in an airtight container, using wax paper between layers to prevent sticking.

Ice cream sandwiches will keep in the freezer for up to three months.