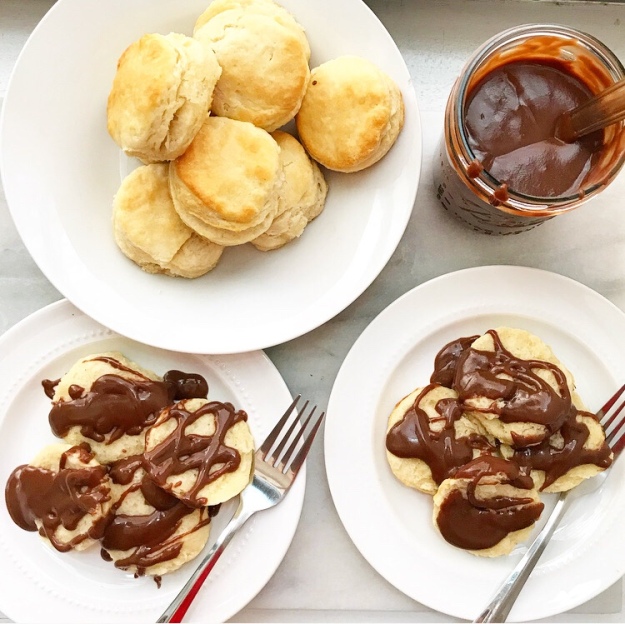 But hear me out. I have hated almost every gravy I’ve ever encountered, if I was even willing to take a bite in the first place. I’m not generally opposed to sauces, but the…gloppiness…of the cream gravies of my Texan childhood pretty much ruined them for me, with one notable exception: Chocolate Gravy.

If you’ve never heard of such a thing, imagine a thin, flour-thickened chocolate pudding that you spoon over Buttermilk Biscuits, preferably made by your old Texan grandma. You know, the one who lets you stay up late watching The Golden Girls and always has chocolate cake on the counter (and lets you slice it without supervision, so you’re really sugared-up when you go back to your parents’ house). 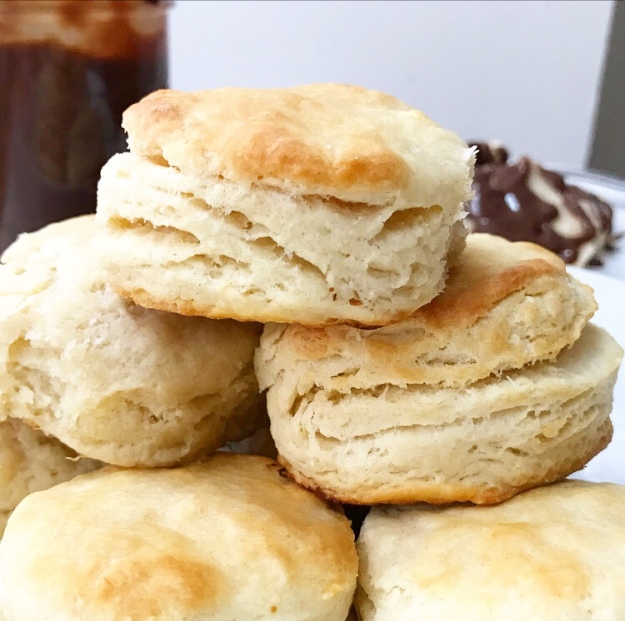 I had one of those grandmas. Her name was Dorothy, but I called her Nonnie, and she was the very best. She let my little sister and I eat Cinnamon Toast Crunch and frozen pizza for dinner on Friday nights (followed up by the aforementioned chocolate cake), but Sunday mornings were sacred.

You see, my dad went to her house for breakfast on Sundays, so she’d pull out all the stops. Even when she was very old and had arthritic hands, she would make sausage patties, eggs fried in bacon grease, sliced tomatoes, and biscuits & gravy. They’d eat breakfast and she’d play with our dog, Lily, while my dad took one of his signature twenty-minute snoozes in the recliner. On the rare occasion that my sisters and I were allowed to skip church and join in on Sunday breakfast at Nonnie’s, she’d add Chocolate Gravy to the menu, just because she loved us.

I’ve been thinking about Nonnie a lot lately. Maybe it’s because what would have been her 100th birthday is coming soon or because she was an amazing improvisational baker or because today marks eleven years living in NYC. Or maybe just because she was a badass lady. Whatever the reason, I’ve been craving Buttermilk Biscuits & Chocolate Gravy lately. And so, here we are. 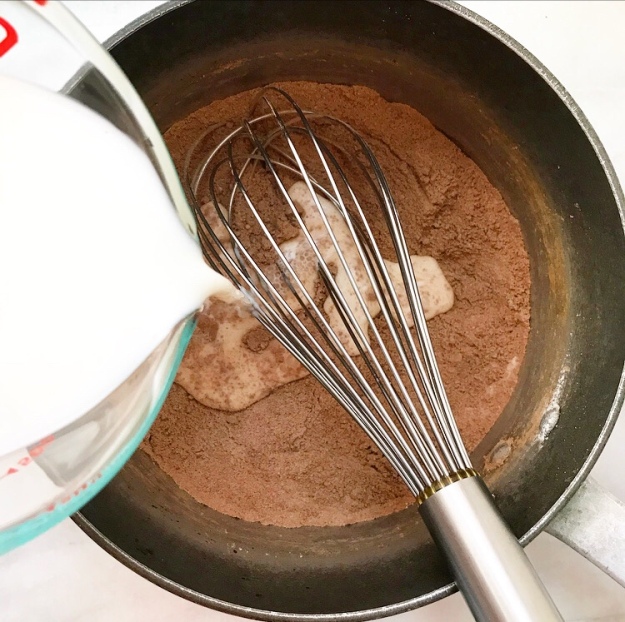 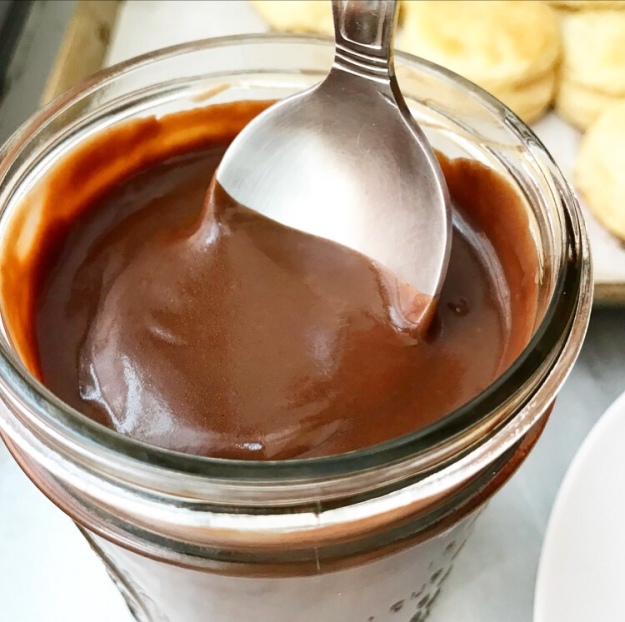 This is not Nonnie’s recipe—as far as I know, she never wrote anything down. Instead, it’s the product of a little trial and error and some taste memory from twenty years ago. I do know that the chocolate gravy I ate as a child was made with the Hershey’s cocoa that came in a can, but as I have never seen that in NYC, I recommend using whatever unsweetened cocoa you like. Dutch process cocoa will make for a deeper chocolate flavor, but natural unsweetened yields the lighter flavor I remember.

As for the biscuits, this recipe is a slight departure from my previous all-time best biscuit recipe. Both are delicious, but I am currently partial to this fluffier, slightly more tender version. 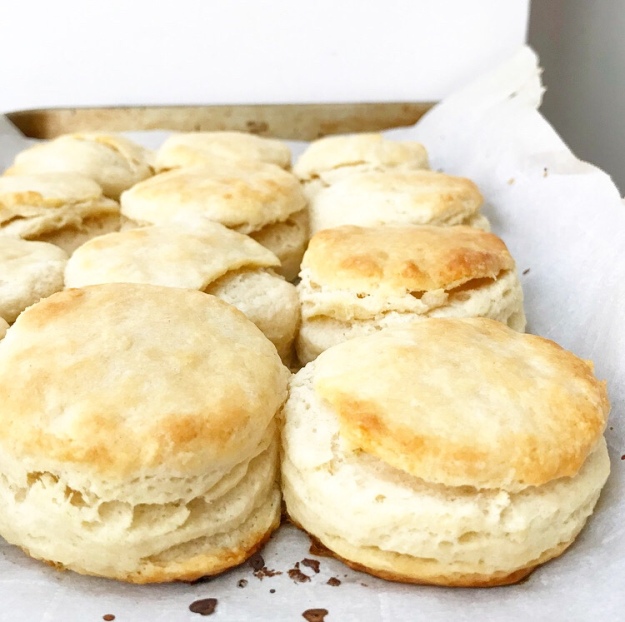 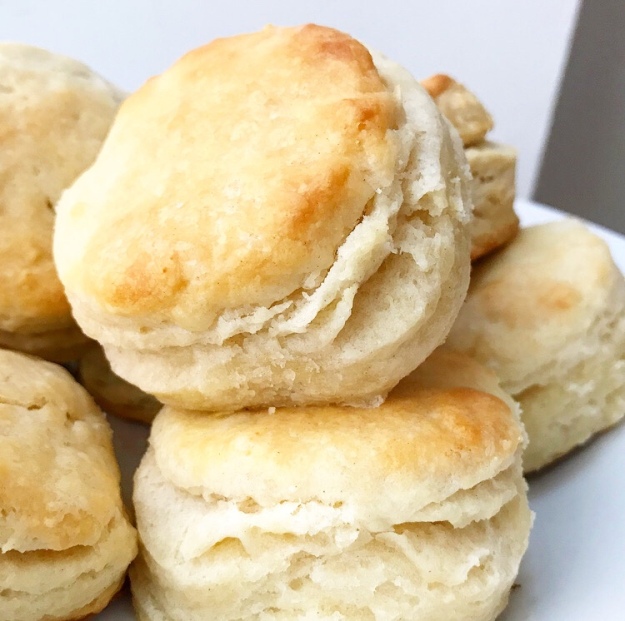 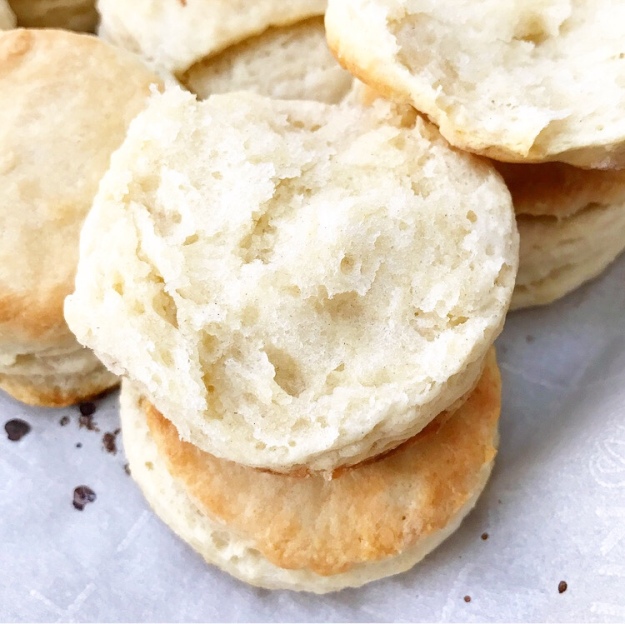 These buttermilk biscuits are made with a touch of cornstarch to mimic the tenderness of cake flour. I also added a smidge more flour and buttermilk, yielding a slightly softer dough. In addition, I’ve taken out the beat-with-a-rolling-pin step, and chosen to bake the biscuits close together on a parchment-lined baking sheet instead of packed into a casserole dish. Regardless of which biscuit recipe you choose though, you’re going to love them drizzled (or smothered) with Chocolate Gravy.

This weekend, do like Nonnie. Make some Buttermilk Biscuits & Chocolate Gravy for someone you love. 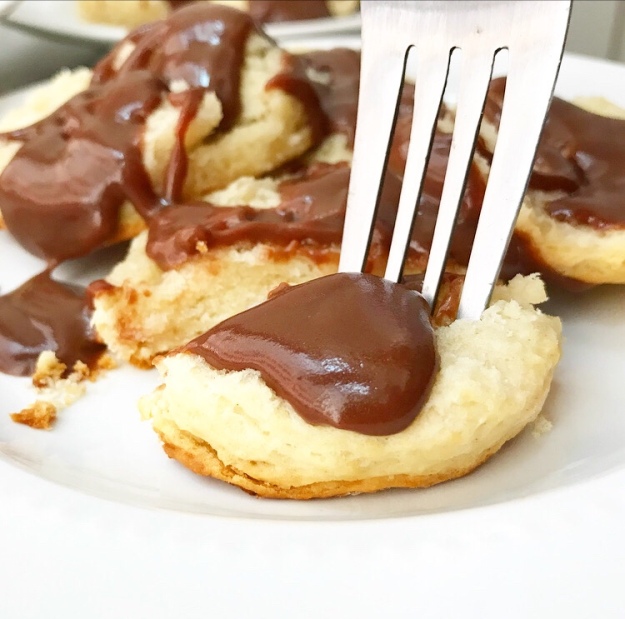 Preheat oven to 400F. Line a baking sheet with parchment or a silicone baking mat. Set aside.

Cut your stick of butter into two 4 tablespoon pieces. Cut one piece into four batons, and cut the other into very thin pats. Refrigerate until needed.

In a large mixing bowl, whisk together flour, cornstarch, sugar, baking powder, and salt. Add chilled butter. Using your fingertips (not your palms!) or a pastry blender, cut cold butter into flour mixture until it is roughly the size of peas.

Pour in 3/4 cup cold buttermilk. Stir with a rubber spatula or wooden spoon until a shaggy dough forms. If it seems dry, add more buttermilk by the tablespoon.

Turn dough (and any unincorporated flour bits) out onto a floured surface. Flour your fingertips and pat the dough into a 1/2-inch thick rectangle. Fold dough in half, and turn one quarter turn. Pat out until it is 1/2-inch thick again. Repeat folding/quarter-turning/patting out until you have done it four times total. Re-flour your surface as necessary.

Cut dough with a biscuit cutter or sharp knife (not serrated). Cut directly down—do not twist. Place biscuits close together in your prepared pan. Pat biscuit dough scraps into a cohesive piece, and cut until you have used all your dough.

Bake biscuits for 14-15 minutes, until they have risen and are starting to brown. Let cool 5-10 minutes. Serve with Chocolate Gravy, if desired.

Biscuits are best the day they are made, but can be kept in an airtight container in the refrigerator for a couple of days.

If you don’t have buttermilk on hand, use this alternative. Pour 1 tablespoon of apple cider vinegar (or lemon juice) in a liquid measuring cup. Pour regular milk up to the 1-cup mark. Let sit 5 minutes in the refrigerator. Stir mixture before proceeding with the recipe.

Sift cocoa, flour, sugar, and salt into a 4-quart pot. Gradually whisk in milk. Place pot over medium heat and whisk continuously until mixture thickens and begins to bubble. Remove from heat and whisk in butter and vanilla. Transfer to a gravy boat or other serving vessel. Serve over split Buttermilk Biscuits. Leftovers will keep in an airtight container in the refrigerator for a few days. Reheat before serving. 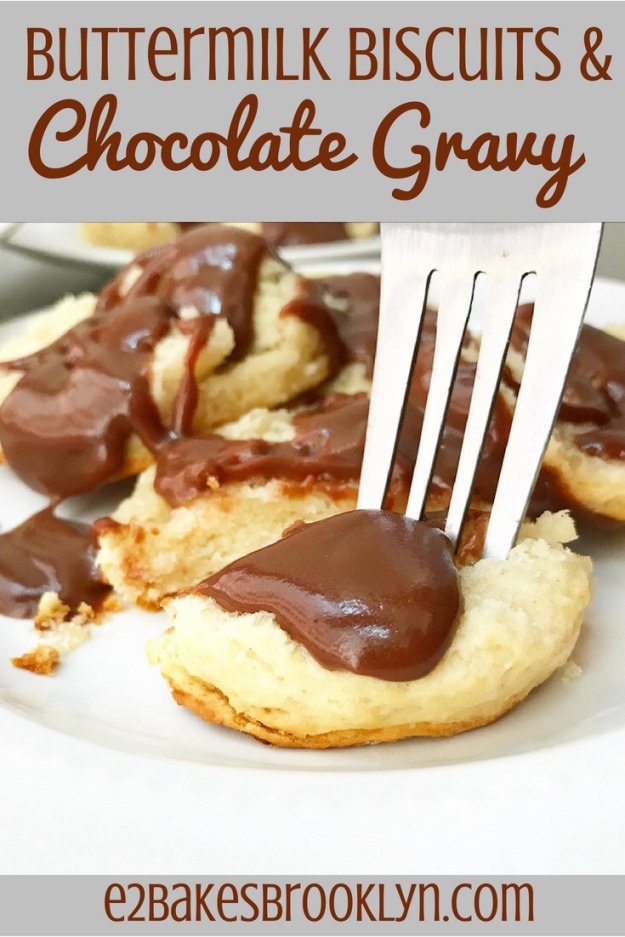