I almost feel silly posting this recipe—how many variations on blondies does one blog need?

But here I am, doing it anyway, because blondies are easy to make, require limited ingredients, and damn near everyone likes them—perfect for this time when all of us are staying at home.

This isn’t so much a variation on blondies as it is a back-to-basics. There are no wild flavors or mix-ins, just pure butterscotch flavor and chocolate chips.

I’ve essentially used the same blondie recipe since 2010, but recently started cutting the flour in an effort to make them denser and chewier. At Christmas, I reduced the usual 1 cup by 2 tablespoons. Now I’ve taken it 2 tablespoons further, so the recipe requires just 3/4 cup flour. Not bad for a whole pan full of blondies!

As promised last week, this recipe has a bevy of options for substitutions so you can make them with whatever you have in your kitchen. No brown sugar? Mix 1 cup of granulated with a tablespoon of molasses to make your own. In a pinch, you can sub the molasses with maple syrup, honey, agave, golden syrup or dark corn syrup. And if you don’t have any of those, just use your granulated sugar as-is and call them “platinum” blondies.

Use whatever salt you have and are comfortable with. If you only have 1/2-1 teaspoon of vanilla to spare, that’s fine. You could probably get away with nixing it altogether. No parchment for pan-lining? Use foil, or grease & flour the pan.

Regarding mix-ins, the sky’s the limit! Add whatever you want into your blondies—busted pretzels, chopped nuts, candy bar pieces, swirls of Nutella, a layer of cheesecake—or leave them completely plain. Whatever you want to use is the right thing to use.

As I’ve said many times before, take my recipe and make it yours.

Basic Blondies
makes one 8- or 9-inch pan, about 16 blondies

Preheat the oven to 350F. Grease an 8-inch square baking dish and line it with parchment (or foil), leaving overhang on two sides for easy removal. Grease again. Set aside.

In a large mixing bowl, whisk together melted butter and brown sugar. Add egg and vanilla, followed by flour and salt. Check to make sure the batter isn’t too warm to the touch before stirring in chocolate chips (you don’t want them to melt).

Spread batter into prepared pan and bake for 20-22 minutes, until a toothpick inserted in the center comes out mostly clean. Let blondies cool in the pan on a rack until they reach room temperature. Run a small, thin knife around the edge of the pan, then use parchment to lift them onto a cutting board. Slice with a large, sharp chef’s knife, wiping the blade clean between cuts. Serve.

Blondies will keep in an airtight container at room temperature for up to 3 days. 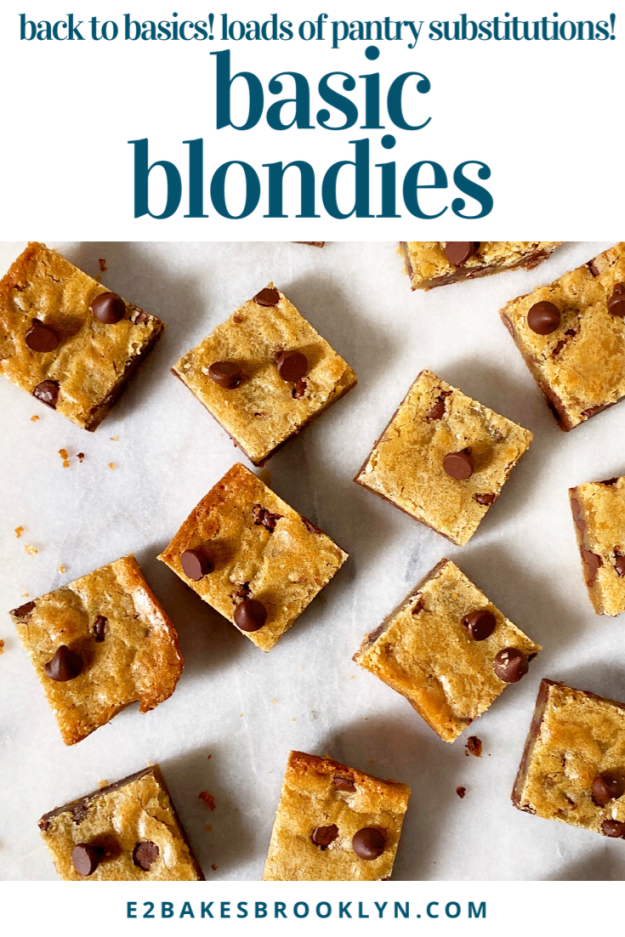 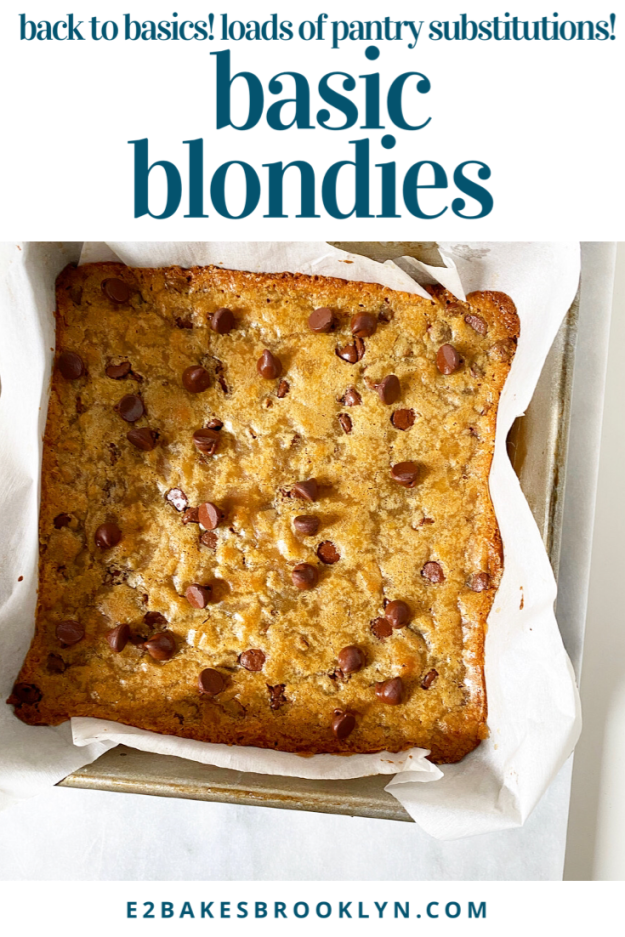